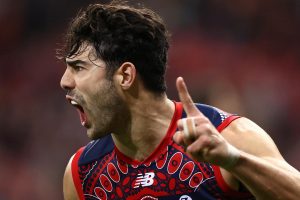 They may be in the midst of their best start to a season in 65 years but the Melbourne Demons have delivered the strongest message yet that their premiership quest is not to be doubted in 2021 with a remarkable, come from behind 22-point win over fellow flag fancies Brisbane at Giants Stadium.

Trailing by four goals at half-time the triumph was set-up by an incredibly eventful third quarter which proved the catalyst in locking away top spot on the ladder for another week, which they are now guaranteed to hold heading into next Monday’s Queens Birthday clash with Collingwood.

The third term fightback was inspired by a Christian Petracca masterclass on the ball, two goals a piece to Tom McDonald and Kysaiah Pickett, who had been quiet up until that point and a resurgence from Steven May down back after he was beaten early by Eric Hipwood.

In the middle of all of that, Brisbane captain Dayne Zorko was reported for striking McDonald in an incident that led to a free-kick for Pickett’s first major as the prodigious talent sparked the Demons yet again, like he has done all season, to light up the second week of Indigenous round.

That momentum carried the Demons forward into the final term as both McDonald and Pickett added their third goals for the evening, while Petracca added a second in yet another sterling display that is likely to attract Brownlow votes.

Earlier it was Zac Bailey who shone, kicking four goals by the midway point of the third quarter in an individual display that at one point looked likely to inspire his side to a victory that would elevate their flag credentials to another level.

Hipwood was dangerous as well in the early stages forcing Simon Goodwin to move Steven May off him for Jake Lever.

From there the Demons defence would settle both man for man and structurally to allow their midfield brigade led by Petracca, Max Gawn, Clayton Oliver and James Harmes to provide the platform for their forward half revival in the second half.

While the sparce surrounds of a neutral Giants Stadium may not have matched the status of this Friday night blockbuster the contest more than lived up to clash between first and third on the table and provided an atmosphere that far outweighed the few thousand in attendance.

As the Demons took control their bevy of fans became more than boisterous and made this a night to remember amid the difficult COVID fixture changes.

The Lions got the jump on the Dees early and the energising Zac Bailey was critical in helping them doing so.

He kicked two first quarter goals, the second of which was a wonderfully instinctive soccer out of mid-air that connected perfectly to give Brisbane the ascendency early.

That became an afterthought though after a masterful pick up and finish at high speed in the third quarter for his fourth of the game just when the Dees had stolen the momentum.

While Dayne Zorko’s report will garner most of the attention a second quarter incident involving Tom Sparrow could land the Demons youngster in trouble with the Match Review Officer.

He ran past a loose ball on the wing and instead of bending to pick it up he collected Daniel Rich in the head with a bump. It’s the exact act the AFL is trying to stamp out and while it didn’t look overly forceful, a suspension wouldn’t be a surprise.

Zorko was reported for striking after collecting Melbourne’s Tom McDonald with a high elbow off the ball.

Zorko made contact with McDonald’s chin as he was trying to push past the Demons forward during the third quarter of Friday night’s match at Giants Stadium in Sydney.

McDonald remonstrated after the incident and pushed Zorko to the ground, but was uninjured and played on.

It was the second incident of the night which will attract attention from the AFL’s match review officer, with Demons midfielder Tom Sparrow to also be put under the microscope after a second-quarter incident with Brisbane’s Daniel Rich.

Sparrow was not reported in that incident, with the officiating umpire only paying Rich a free kick after Sparrow ran past the ball and collected Rich high with an elbow.

Rich took the free kick and played on without requiring medical treatment.