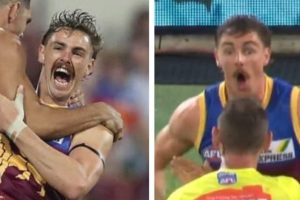 Joe Daniher’s highly-anticipated debut for the Brisbane Lions got off to a chaotic start, with the key forward at the centre of the action at the Gabba.

Facing the Sydney Swans on Saturday evening, Daniher got his 2020 season off to a flyer with a superb goal early in the opening term.

After cleaning up a loose ball inside 50 and evading Swans defender Dane Rampe, the 27-year-old booted a goal from a 45-degree angle to extend Brisbane’s lead to 18.

Daniher immediately grabbed his new jersey and celebrated with his ecstatic teammates.

Joey Daniher grabs the jumper as he kicks his first goal as a Lion! pic.twitter.com/kivuFFIRps

Five-time premiership player Dermott Brereton said on Fox Footy: “Wonderfully played … he knew which side Rampe was attacking him from and he worked him off the ball.

“That’s the kind of play you expect from a five-foot-nine, agile Rioli-type — not a bloke who’s 201cm.

“But if ever there was a very good miss by foot, that was it.”

Daniher once again found in the spotlight a few minutes later, but in less ideal circumstances.

After the former Bomber claimed a mark on the wing, Rampe wrapped his arms around Daniher, who quickly reacted by flinging his elbow back and striking his opponent in the head.

The umpire immediately repayed a free kick reversal and reported Daniher for striking, much to his frustration.

Aaaand Joe Daniher is on report.

Busy first quarter as a Lion!#AFLLionsSwans

Eventful first 15 minutes in a Brisbane Lions jumper for Joe Daniher. Turns Dane Rampe inside out for goal, later reported for elbowing Rampe to the head. Probably cost him 💰💰 instead of games. #AFLLionsSwans

Brisbane great Alastair Lynch said on Fox Footy: “It didn’t look great live and we all understand that once you hit the head, you’re going to be in a fair amount of strife. So it was understandable that he was reported.

“But I think he’s probably lucky that Dane Rampe’s head was really close to his arm and it became more of a push.

“I don’t think he’ll be any chance of getting suspended with that one.”