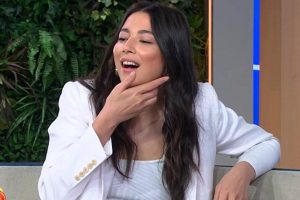 Aussie supermodel Jessica Gomes has been involved in an awkward live TV walkout after being asked about rumours she is romantically involved with AFL star Dustin Martin.

Gomes last month refused to confirm rumours she’s dating the Richmond star and side-stepped the question again on Tuesday morning during a segment on Channel 7’s The Morning Show.

The segment broke down after the 35-year-old was asked a “hypothetical” question about her private life.

Her evasive response prompted follow up questions from co-host Larry Emdur before Gomes appeared to accidentally walk off set while the cameras were still rolling. Emdur then did his own mock storm off, leaving both Gomes and co-host Kylie Gillies laughing awkwardly.

“I have a hypothetical question,” Emdur started the conversation.

Gomes responded: “Yeah, I don’t know what to say.

Brisbane came up with a unique way of shutting down Dustin Martin’s famous &quot;don’t argue&quot;….

Brisbane came up with a unique way of shutting down Dustin Martin’s famous &quot;don’t argue&quot;.

When the segment fell off the tracks, Gomes asked: “Hypothetically, are we still filming?”

When Emdur said the cameras were off she then stood up and walked in front of the camera before Emdur and Gillies could get her back down on the studio couch.”

Gomes was in April linked to the 29-year-old three-time premiership winner.

“I know people care about who you’re dating but I really want to talk about the projects I’m doing,” Gomes told Stellar Magazine.

“That’s really important for a woman. I feel men don’t really get asked these types of questions, it’s more women who get asked ‘Who are you dating?’

“For me, it’s always worked best, and it keeps me safe, by keeping those things private. My life is so out in the open through social media and so to have that balance – for my own mental health – I feel the need to keep those things private. I hope women can feel there’s a currency in what they’re doing; it’s not just who they’re dating.”

But Gomes was forthright about her desire to start a family one day.

Jessica Gomes is staying quiet on her private life.Source:Instagram

Dustin Martin does a bit of modelling himself.Source:Supplied

“I want to have a family. And I want [my future children] to have the same kind of upbringing I had,” she said. “I’m definitely looking for someone who’s a family person …

“My parents allowed me to become the person I am and they provided a safe environment for me to be myself in. My mum put me in to modelling because she saw something in me, and my dad has always been protective and guided me. They’ve taught me good morals and to have integrity.”

“When I have children, I hope they have lots of idols they look up to – people who look similar to them and they can connect with,” she added.

Gomes signed with IMG Models as a 19-year-old after moving to New York.

She appeared in the swimsuit edition of Sports Illustrated every year from 2008 to 2015 before working as a fashion ambassador for David Jones from 2012 to 2019.

She was also linked to Aussie F1 star Daniel Ricciardo but they denied the rumours.

Martin has also faced intense speculation about his private life since he emerged as the AFL’s best player.

At different times over the past few years he has been linked to Sydney food blogger Tania Acitelli, Phoebe Carpenter, who once dated rugby league star Mitchell Pearce, and model Chontelle Berryman.