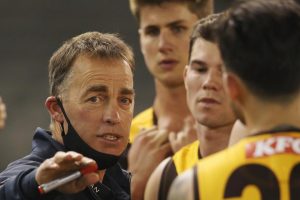 Hawthorn coach Alastair Clarkson is set to quit the club at the end of the season in a shock move.

A scheduled weekly press conference for the four-time premiership coach was abandoned on Friday morning amid reports surfacing he had made the decision not to honour his part in the club’s succession plan.

The Herald Sun reported Clarkson and the club agreed to part ways at a Thursday board meeting.

Only last Friday Clarkson, who was set to hand over the reins to former club captain Sam Mitchell at the end of 2022, declared he would be coach next season as per the arrangement.

In a 13-minute monologue at his weekly media conference, he said he would “see through my commitment”.

BREAKING | Hawthorn and Alastair Clarkson will part ways at the end of the season, according to reports.