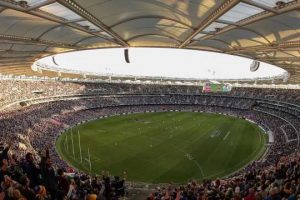 The AFL has scrapped the pre-finals bye and will go straight in to the post-season after the conclusion of the home and away season this weekend.

As states continue to battle Covid outbreaks, it’s understood AFL clubs have been informed the week off will instead be held over and used during the finals.

It could possibly mean a week off for teams who make the Grand Final, which is now almost certain to be played in Perth, which could give participating teams time to both travel and quarantine if necessary.

Melbourne’s lockdown was extended on Monday until at least September 2 which is set to result in the season decider being shifted away from the MCG for the second straight season.

The Grand Final will remain on Saturday, September 25.

It’s believed clubs were told on Sunday night they will got straight from the home and away season into finals without a week off.

Places in the final eight are still up for grabs. Wins for Essendon and Greater Western Sydney in this week’s final round will guarantee them the final two spots.

The location for the AFL finals is yet to be confirmed. Games have continued to be played in Melbourne without crowds, but in front of crowds in Adelaide and Perth.

The bye before the finals was introduced for 2016 after several seasons of clubs resting players in the final round of the home and away season.

Clubs have been informed the pre-finals bye has been removed. @cleary_mitch has more on @AFLcomau. https://t.co/OcqtEmLkRx

Last weekend both Geelong coach Chris Scott and Melbourne counterpart Simon Goodwin demanded clarity on whether there would be a weekend‘s rest ahead of the finals.

“People like to plan what’s going on, they like to understand where things are at, and I think the more we can give people an indication on what that looks like, the better – because you do base some decisions this time of year around that,” Goodwin said after his team beat Adelaide by 41 points at the MCG on Sunday.

“I think there’ll be a lot of clubs at the moment that would be looking at that and thinking they could make some decisions based on what’s going on so the more information we can get, the better.

“We don’t know what’s happening next week (beyond Round 23) so that would be nice to know what’s going on there.”

The latest decision from the AFL is expected to have a major impact on team selection for this weekend‘s round 23 of matches.