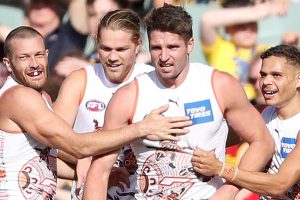 The GWS Giants sent out a warning to rivals they are a premiership force with an emphatic victory over a lacklustre Adelaide at Adelaide Oval on Saturday.

Claiming their third win of the season, the Giants reigned supreme in the engine room to dominate the home side with the 67-point triumph.

A bonus for the Giants was Jesse Hogan bagging four goals in his debut for the club.

The Crows were belted all over the ground and were never a threat, dropping their third successive game with an awful performance.

The Giants were kicking into the breeze for the opening quarter, but that cannot be used as an excuse for the sloppy kicking in front goal.

Given plenty of opportunities to attack on the back of a dominance in clearances, GWS had some bad misses with Brent Daniel and Tom Green among the guilty parties.

Toby Greene also had his chances to cause some damage on the scoreboard, only to add two behinds.

Just seconds before the quarter’s final siren, Giants’ Sam Reid finally found some accuracy with a terrific goal from the boundary. Unfortunately for Reid, his handball receive was ruled a throw.

The pressure of the Giants around the ball was exceptional and their desperation created a flood of chances.

Their relentless tackling caused constant turnovers and skill error after skill error from the Crows and enabled them to smash the home side in the clearances.

Much of the second quarter was scrappy with missed targets by foot, dropped chest marks and poor kicking efficiency.

The work of both teams inside 50 lacked polish, but the Giants had so much possession they eventually started to find the goals.

Hogan was a hero in his Giants debut. (Photo by Sarah Reed/AFL Photos via Getty Images)Source:Getty Images

Crows forward Shane McAdam did not have a stat in the first half of football. That is two quarters without touching the ball.

It didn’t take long into the third quarter for him to finally get a kick, but he had to roam well up the field to get into the action.

To sum up his day, and probably that of the Crows, McAdam missed from point blank range late in the third quarter when he tried to dribble the ball through.

Not that McAdam didn’t have a lot of mates failing to have an impact. Sam Berry, James Rowe and Riley Thilthorpe, highly impressive in his debut against the Hawks, could not get into the game in the first half.

Looking for answers in the final quarter, the Crows moved Nick Murray from defence to attack and he nailed a goal after eight minutes.

There was a peek at the future with youngster Thilthorpe starting the final term on the wing, before being given a run in ruck against experienced Shane Mumford.

Thilthorpe immediately caused a mistake from the Giants.