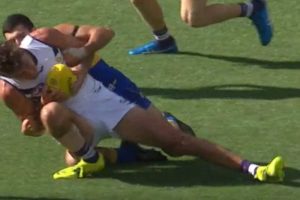 Fremantle have suffered a series of scares in the first quarter of the pre-season clash against the West Coast, with two of the biggest names suffering niggles.

Dockers fans had their hearts in their mouths when two-time Brownlow winner Nat Fyfe went from the field with a lower leg complaint.

While it didn’t appear too serious as he returned to the field soon after, but the same couldn't be said for ruckman Rory Lobb, who was in a bad way after he was tackled awkwardly onto his right leg.

Brownlow Medallist Gerard Healy said Lobb reportedly had pain on the outside of his leg, which could be a nasty sign of an ACL injury.

“We’ve just have to sit back and hope for the very best for this bloke because he’s such a pivotal player, it’s a cruel blow at the start of the season,” he said on Fox Footy.

He added the crush injuries, such as the syndesmosis injury was on the rise.

The doctors took him straight down to the change rooms after the injury but re-emerged on the bench with ice strapped to his leg.

Rory Lobb has had a tough break.Source:FOX SPORTS

In the second quarter, he had changed and had crutches with the Dockers confirming he “has sustained a knee injury and won’t take any further part today. He will be sent for scans to determine the severity”.

Rory Lobb done. Knee iced up. Not ideal with Sean Darcy still out with a knee. Big opportunity for Lloyd Meek.

Rory Lobb in huge strife as he is helped off with a knee injury after it buckled on him early v West Coast. Gerard Healy hoping it's only a bad medial ligament sprain on @FOXFOOTY commentary.

However he’s not the only player to go down with an injury from the pre-season week with the Magpies copping a double blow in Will Kelly and Steele Sidebottom, while Port Adelaide’s Connor Rozee will need foot surgery to fix an issue with a joint in his foot, despite scoring two goals with the injury in the 17.14 (116) to 6.9 (45) win over the Crows on Sunday afternoon.

But The Age’s chief footy writer Jake Niall heaped the pressure on the ruckman to perform in 2021.

“Rory Lobb is a talent, he’s got great athleticism,” he told Footy on Nine. “He doesn’t read the play very well, he’s never really put together a really good season of AFL footy. At GWS at one stage, he looked like being anything as a very good hybrid forward ruck, he’s a good mark when he gets a run at the ball. But he just hasn’t done it yet and Fremantle did give up a lot to get him.”

An injury like that is the last thing he’d want.