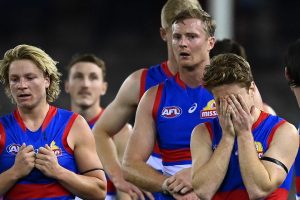 Western Bulldogs coach Luke Beveridge admitted his team was “absolutely flat” following their costly two-point loss to Port Adelaide on Friday night but stressed they still had plenty to play for during the finals.

The Dogs’ third loss in a row will very likely cost them a top-four spot, and a coveted double chance, considering Brisbane only has to beat an injury-hit West Coast at the Gabba by approximately five goals to jump from fifth to fourth on the ladder, and it’s a result Beveridge is expecting.

What would make that pill even harder to swallow for the Dogs is the fact they spent the past 20 weeks inside the top four.

“We worked hard to get ourselves in a strong position up until just over a month ago,” Beveridge said post-match.

“We’re anticipating we’re going to finish fifth, and I spoke to the boys about how we’re all in their corner.

“All we can do is believe that we can stay the course and continue on and win as many games as we can from here on in, and do our best to stay positive and that unified approach to next week is absolutely crucial to how we front up.” 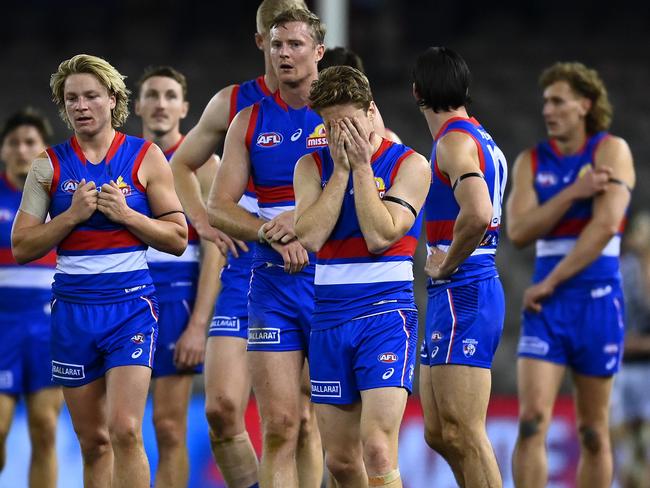 The Bulldogs surrendered the lead for the first time late in the fourth quarter on Friday night. (Photo by Quinn Rooney/Getty Images)Source:Getty Images

Given Victoria is out of bounds for at least the first two weeks of the finals due to yet another Covid lockdown, Beveridge said his preference would be for the Dogs to play their ‘home’ elimination final in Adelaide first up if they do indeed finish fifth.

Beveridge used undersized defender Lewis Young as his No. 1 ruck against the Power, opting to station Tim English as a permanent forward, and the Dogs coach didn’t envisage any change to that set-up with Stefan Martin highly doubtful to return next week, having not played since Round 12 and only participated in one full training session in all that time.

The former Brisbane big man will play in a scratch match on Saturday, however.

“You can’t pick a player on the back of that preparation so we’ve just got to make do,” Beveridge said.

“Stef, at the moment, is not a player that we can hang our hat on.”

And defender Ryan Gardner, who has recovered from a shoulder operation, was far from guaranteed to return next week either due his lack of game time recently, but Josh Schache loomed as a more likely inclusion after being an unused medical sub on Friday night.

Meanwhile, Port Adelaide coach Ken Hinkley was thrilled with his team’s performance, declaring his side will be as good as any team in the premiership race after securing a top-two spot.

“We’re going to be tough to beat, put it that way.” The Power handed their coach a win in his 200th game in the hot seat. (Photo by Quinn Rooney/Getty Images)Source:Getty Images

And the possibility of potentially staying in Adelaide for the duration of the finals series, with Adelaide Oval some chance to host the grand final, presented a unique opportunity for the Power.

“We’d love nothing better than to stay at Adelaide Oval the whole way because that means we’re winning,” he said.

But the stirring come-from-behind victory came at a cost, with young forward Mitch Georgiades injuring his hamstring. Hinkley anticipated he would be ready in 2-3 weeks, meaning he might not be available until the preliminary final weekend, should the Power get that far.

In better news for Port Adelaide, small forward Orazio Fantasia (hamstring) will return for the side’s home qualifying final next week, while Sam Powell-Pepper headlined a large group of players ready and available to be recalled as well.