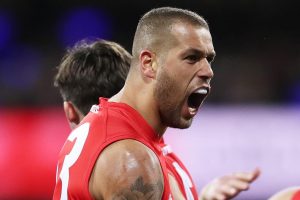 Buddy Franklin continues to prove there is plenty of life left in his AFL career.

The superstar forward set the SCG alight in the opening term of Sydney’s Round 13 clash against Hawthorn.

He was involved in everything — kicking a goal, setting up another and clunking contested marks.

The magical 1000-goal milestone is edging slowly within reach for Franklin, who notched up his 969th major early in the game.

He wheeled onto his left to kick a vintage snap, but it was another touch of class that had fans in raptures.

Outside the 50 metre arc, the 34-year-old danced around two defenders before deftly passing to teammate Will Hayward, who duly converted.

Sign us up for more of this from Bud 👀#AFLSwansHawkspic.twitter.com/uX8kORx0QR

Buddy's in everything. A real treat to have him back like this. So many thought he was cooked at AFL level #AFLSwansHawks

Buddy is making so many people who doubted him look silly this year.

But despite Buddy’s heroics, the Hawks had the better of the first quarter, leading the Swans by six points at quarter-time.

Tom Mitchell was running amok for the men in brown and gold against his former side, accumulating 10 disposals and a goal in the first stanza alone.

A win will see the Swans jump into the top four, while the Hawks are hoping to notch up their third victory of the season.

Hawthorn widened the margin to 24 points at halftime.