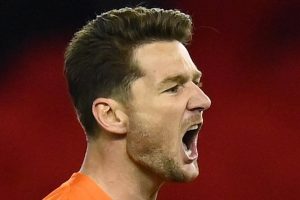 The Greater Western Sydney Giants have sent a scary warning to the AFL by posting their biggest quarter-time score in over two years.

The Giants booted 7.3 (45) to post a 31-point lead at the first change of Friday night’s clash with Richmond.

Not since round 18 of the 2019 season has GWS taken such a big score into the rooms after one term.

That season, the Giants famously marched to their first ever grand final appearance, where they were defeated by Friday night’s opponents, the Tigers.

But the script was flipped early on in this most recent exchange.

The score was also the second-biggest quarter time haul this season — only the Power in round 11 were more prolific in front of goal in the opening term than the Giants were on Friday night.

The Giants booted seven goals to the Tigers’ two in the opening term of Friday night’s game. (Photo by Quinn Rooney/Getty Images)Source:Getty Images

In the absence of suspended goal sneak Toby Greene, Tim Taranto and Harry Himmelberg helped themselves to two majors each in the first term. The Giants controlled the footy better than the defending premiers, scoring 5.2 (32) of their points from intercepts, compared to Richmond’s 1.0 (6).

GWS enjoyed six marks in its forward 50 for the term and, pleasingly for coach Leon Cameron, managed to convert those opportunities into goals on four occasions.

Recently re-signed Giant Josh Kelly returned from an ankle injury to lead the disposal count for his side to quarter time.

Big first quarter from the Giants, been able to slice their way through Rich.
10 Shots from 16 entries 😳#[email protected]

GWS are absolutely owning Tigers at the moment. #AFLGiantsTigers

At the first break, it was panic stations for the Tigers, whose finals hopes will be all but over should they lose Friday night’s game.

Richmond had won just two of its last eight prior to Friday night but had managed to stay with the pack in the middle of the ladder and in the hunt for a finals spot.

However, with three other teams heading into the weekend on 36 competition points, it’ll be an uphill battle for the Tigers to play September footy if they can’t wrestle the lead from the Giants.

They’ll have their work cut out for them in the second half — the Giants restricted the Tigers to just two goals in the second quarter, all the while chalking up five more of their own.

The margin sat at 50 points with two quarters to play.