Home » eSports » AFL Round 12 Adelaide v Collingwood: All the news, analysis and fallout from Adelaide Oval

AFL Round 12 Adelaide v Collingwood: All the news, analysis and fallout from Adelaide Oval 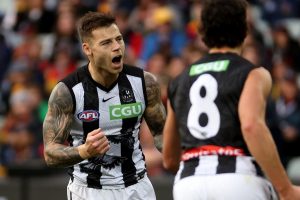 Jamie Elliott has made a sensational return to footy for Collingwood, kicking five goals in the first half against Adelaide.

Elliott had been out since March with a leg injury, and at Adelaide Oval he showed why he is so important to the Magpies – who have struggled in his absence.

Elliott’s incredible accuracy helped Collingwood burst out of the blocks against the Crows, taking a 23-point lead into the first break.

Criticised for their dour style of play in recent weeks, Collingwood cut through the Crows time after time in the first quarter – which few would have seen coming.

“In the first quarter particularly Collingwood were able to use the ball quickly, use the corridor,” Hawthorn legend Jason Dunstall said on Fox Footy.

Adelaide fought back in the second quarter, getting to within a kick of the Pies at half-time.

The Crows arguably should have been in front with talisman Taylor Walker uncharacteristically wayward in front of goal.

While Elliott had a perfect 5.0, Walker had 1.5 at half-time – a massive surprise for a player who is usually extremely accurate in front of goal.

Originally published asElliott sparks Pies with masterclass half on return