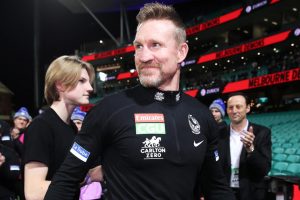 Nathan Buckley’s 218-game career as Collingwood coach has ended on a massive high note with his Magpies surviving a late surge to topple the ladder-leading Melbourne by 17 points in a Queen’s Birthday stunner at the SCG.

After controlling proceedings for most of the day, Collingwood got out to a 20-point lead early in the final quarter.

However, Melbourne strung together four scoring shots in a row late in the game, but luckily for the Pies, only one of them was a goal, to Ed Langdon.

And after Brayden Maynard took a match-saving mark deep in defence with less than a minute to go, the ensuing transition ended up with club stalwart Steele Sidebottom, who fittingly iced the cake for Buckley with a goal after the siren.

On a day that saw another 11 sliders participate in the annual Big Freeze at the MCG before the match to honour the legendary Neale Daniher and help raise funds for his courageous fight against MND, the 16th-placed Magpies caused one of the biggest upsets of the season in handing the Demons just their second loss of 2021.

Buckley said post-game he was confident the Pies’ regeneration was on track.

“It’s going to be a pretty good footy team. They’re on their way.”

Nathan Buckley leaves the field for the last time as Collingwood coach.Source:Getty Images

Buckley and Collingwood have gone together like a horse and carriage for a very long time, given he spent 26 years at the club as coach, assistant coach and one of their greatest ever players, and his players sent him off in fitting fashion, playing with renewed freedom after being unshackled by the burden of expectations.

Pies should sack the coach every week

Melbourne’s backline is usually the most organised in the competition, but it was uncharacteristically disjointed, allowing the Magpies 18 marks inside 50 — their previous high for the year was 15 — while down the other end, the Demons could manage only nine.

Melbourne’s usual pressure wasn’t there either, the premiership favourites laying just 44 tackles, well down on their season average of 64 per game. And with a clear advantage in that category (52-44), the Magpies out-hunted their more-fancied opponents for longer.

The first quarter was a scrappy affair which was punctuated by numerous turnovers from both sides. The combined AFL average for clanger kicks per quarter this season is 11, and there were already 19 committed at the 24-minute mark of the first term. That figure ballooned out to 41 at the 20-minute mark of the third quarter.

But just as it did against a couple of other top-four contenders in Port Adelaide and Geelong recently, the unattractive nature of the contest suited the Magpies just fine. They then increased their pressure, cleaned up their disposal and sped up their ball movement in the second quarter to boot four goals in a row, including a pair to Brody Mihocek, before taking a 16-point lead at halftime.

Like they did against Brisbane last week, the Demons lifted their intensity after the break, registering 10 of the first 11 inside-50s of the second half to kick the first three goals on the way to a one-point lead late in the third quarter.

But on the back of some great work from Sidebottom in particular, Collingwood hit back hard, kicking four goals on the trot to stretch their lead to 20 points early in the final quarter.

Jordan De Goey didn’t get off to a great start when his kick across Melbourne’s goal in the opening stages missed its target and eventually led to Alex Neal-Bullen kicking the first goal of the game for the Demons.

But the Collingwood star put that setback behind him to become the most influential player on the ground. Relishing the freedom of playing mainly on the ball, De Goey was instrumental to Pies’ victory, finishing up with a game-high 33 disposals (11 contested) and seven clearances, to go with three goal assists, 11 score involvements.

Kysaiah Pickett flies high, but didn’t come down with the footy.Source:Getty Images

A controversial moment occurred midway through the third quarter when Collingwood’s Darcy Cameron was paid a mark 20m out from goal, despite TV replays clearly showing Steven May’s hands touched the ball first. A bemused May’s desperate protestations to the umpire fell on deaf ears as Cameron coolly slotted it home for the third of his four majors to put the Magpies back in front.

The result continued Collingwood’s domination of the modern-era Queen’s Birthday fixture, having now won 13 of 20 meetings with Melbourne on the public holiday, including eight of the past 10.

One of the highlights of the second quarter came at the 24-minute mark when De Goey brilliant spun out of traffic to avoid Harrison Petty and dish off a handball to Beau McCreery who performed his own pirouette, which also included a strong fend-off of Clayton Oliver, before checksiding it home from 20m out to put the Magpies 14 points to the good.