Grand Tour champion Simon Yates will open his season in Australia for the first time and has named the Giro d'Italia and Tokyo Olympics as his main goals for 2020 despite a career breakthrough at the Tour de France this year.

Yates (Mitchelton-Scott) will kick off his campaign at the Tour Down Under in Adelaide next month before travelling to Victoria for the Cadel Evans Great Ocean Road Race and Sun Tour in February.

"I have always wanted to do the Aussie summer. Of course riding for an Australian team there is more pressure, but I really enjoy getting stuck into racing and giving it a good go. With these being our home races, the boys are super motivated to give everything," Yates said. 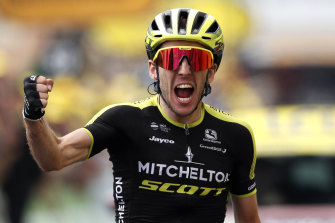 "I would love to hit the ground running, so when any opportunities to take my own chances come I hope to grab them with both hands."

The Olympics begin on July 24, six days after the Tour de France, which has been brought forward, finishes. The schedule has influenced Yates’ plans and will also see him begin his season earlier than usual, in January rather than February.

"After competing in both the Giro and the Tour last season, I was extremely tired and so we decided as a team to stop earlier than normal to give myself the best possible preparation for 2020," Yates said.

"Winter has been going great so far and I have just finished a very important block of training in Gran Canaria, but I will fly out early to Australia to be able to adapt to the heat." 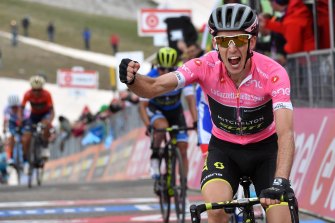 Simon Yates in the pink leader’s jersey at the 2018 Giro d’Italia. Credit:AP

The 2018 Vuelta a Espana champion entered the Tour this year intending to play a support role for his identical twin, Adam, but became a star act with a maiden victory on stage 12 that he backed up on stage 15 in Foix.

The British climber was clear on stage 19 with eventual Tour winner Egan Bernal (Ineos) before hail and a landslide near the finish in Tignes saw the race cancelled and times taken from the penultimate climb at the Col de l'Iseran.

His performance at the Tour came after an eighth place finish at the Giro d'Italia, where Yates had unfinished business. He almost won the race in 2018, spending 13 days in the pink leader's jersey only to unravel on stage 19, which Chris Froome (Ineos) claimed to take the race lead and ultimately the overall title. 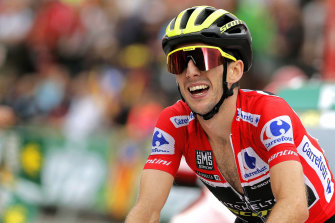 Simon Yates at the 2018 Vuelta a Espana, which he won in a first for his Australian-registered team. Credit:EPA via AAP

"The Giro is a race with a lot of charm and character. The fans are passionate, the parcours are amazing and it always produces exciting, aggressive racing, which I enjoy," Yates said.

"Last year, I just felt I never really got to the level that I expect of myself. I want to go back in the best shape possible and try again. That, and along with the Olympics coming so close to the Tour de France, I believe the best way to approach the Olympics would be to do the Giro.

"The 2020 route is a very traditional course with a lot of time trailing kilometres and many high-altitude mountain passes. We will have to prepare for anything to happen," he continued.

"The aim is to have the condition and shape that I know I can have, give everything I have, which I hope will give me the best possible chance of winning."