Amanda Spratt believes she has become one of the best cyclists in the world and has backed herself for a gold-medal bid at the Olympics and world championships this year as women's cycling welcomes reforms aimed at improving the professionalism of the sport.

The International Cycling Union (UCI) has imposed a €15,000 ($24,200) minimum wage onto top-tier teams for 2020 as part of sweeping changes that will be rolled out over the next three seasons.

Eight squads met the minimum wage requirement this year and qualified for top-tier licences under a revised vetting system that has split the peloton into two divisions. 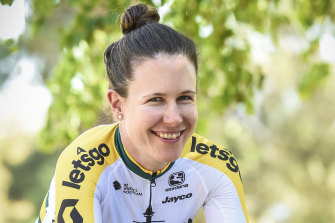 The changes come after two rider surveys conducted in 2017 found that 46.9 per cent of the women's peloton were paid €5000 ($8071) or less per year, and four years after Australian racer Tiffany Cromwell estimated that the base salary of Lizzie Deignan, then world champion, was "not even at 10 per cent" of the €4 million ($6.4 million) men's counterpart Peter Sagan was reportedly earning.

Spratt's rise is concurrent with the development of women's cycling that is far from being on par with the men's WorldTour but is evolving.

"I've been overseas in Europe competing on and off for 15 years now," Spratt says. "When I first started out in Europe there was probably one, two teams at the most that you'd really even consider wanting to go to. There just weren't bigger professional teams and there weren't a lot of teams with an international roster. Now there are many."

It's hoped the reforms will also improve the sport's culture. A 2019 #MeToo-inspired report exposed allegations of sexual harassment and assault in the women's peloton, leading Dutch legend Marianne Vos, on a recent trip to Melbourne, to say she was "lucky" not to have experienced it.

But Spratt says: "I was really fortunate. The first years I went over [to Europe] we had the Australian Institute of Sport development program so I was there with a group of Australians and very much supported in that environment. Off the bike I felt very supported and safe and it was almost like a big adventure for me.

"The biggest shock was just the racing and how they race. You're racing against girls that are used to racing with 150 riders and we were more used to riding in a bunch of 20."

The Mitchelton-Scott all-rounder gambled in 2018 when she agreed in consultation with long-time coach Gene Bates to forgo the Commonwealth Games and instead compete in the biggest races across Europe, which serve as the industry's true yardstick.

It was a "scary" call, especially considering the Games would have guaranteed her national media coverage in a sport that is reliant on but struggles to find sponsorship, partly due to inadequate media exposure.

'I think I’ve really progressed and become one of the best riders in the world and I believe it.'

Now, Spratt, the newly crowned Australian road champion who is trying to win a fourth consecutive Tour Down Under, believes the gamble has paid off.

The 32-year-old finished third at the Amstel Gold Race in 2018, has placed third overall at the past two Giros d'Italia, last year behind teammate and title winner Annemiek van Vleuten, and won a silver and bronze medal at the 2018 and 2019 road world championships, respectively.

"I really took a step up in that 2018 season with a podium in the Ardennes [classics] and finishing off with the worlds. It allowed me to head into the 2019 season with a lot of confidence as well and again it was a great season," Spratt says.

"If you look at the results on paper it didn't look as good [as 2018] but in my opinion it was still my best season to date and I was really proud of the ride at worlds. I had great team support there, they set me up well, I managed to stay really calm throughout that whole race and didn't panic.

"For me, that was a big step forward in terms of just waiting, being patient and using my energy when it really counts. If we look ahead to the big races coming up this season, that's what's going to be really be important."

Spratt is set to lead Australia in the women's road race at Tokyo 2020, which will be her third Olympics following a debut at London 2012, and she can comfortably say the aim is to win gold. That has come not only with her own gains, but also with improvements in national team programs.

"Yeah, it is. I feel confident that that's a realistic goal. I think I've really progressed and become one of the best riders in the world and I believe it," she says.

"The last two years in particular we've really created a plan that we thought could work long-term. We don't want to be into an Olympic year and think, 'OK, is this going to work, is that going to work?'

"With my coach Gene, 2018 and 2019 were almost like dress rehearsals in terms of how we want to prepare for the season and having those targets, the Ardennes, Giro period, we really nailed that.

"We're going to go with a similar approach this year. Gene has encouraged me to not just only focus on the Olympics. I operate better when I have all these goals along the way, so that's the mentality we're going to take."

Spratt believes media exposure remains the most important next step for the sport, which is difficult when the men's and women's calendar sometimes clash. For example, the Giro is the biggest stage  race on the women's calendar, but it overlaps with the beginning of the men's Tour de France.

"Overall, we've got the women's WorldTour, I think races are becoming a lot more professional now, which is great," Spratt says. "The biggest step that still needs to be taken to improve women's cycling is to get more TV coverage because that's what attracts the sponsors. That's the biggest challenge we face at the moment is how do we make that happen."