Porte sends O’Grady clear message after Tour Down Under triumph

Adelaide: Tour Down Under champion Richie Porte has a message for incoming race director Stuart O'Grady.

Amid speculation O'Grady might look to put his own stamp on the event in 2021 after taking over from long-time director Mike Turtur, Porte wants him to leave it alone. 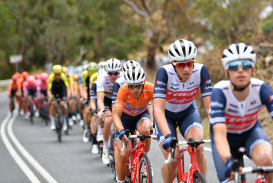 Richie Porte and his Trek-Segafredo teammates during stage four of the Tour Down Under from Norwood to Murray Bridge in South Australia on Friday.Credit:AAP

The 34-year-old won stage three on Thursday at Paracombe to take temporary ownership of the ochre jersey, which he reclaimed from defending champion Daryl Impey on Sunday's brutal climb up Willunga.

"That last 800 metres bloody hurt, you know. It was probably the most painful 800 metres of my life," Porte said. "You've got someone like Simon Yates sat on your wheel and it's not a given that you're going to drop him.

"I think the crowds there were just awesome and it is electrifying to get to the top. You don't get to take it in too much because you're in a different world of hurt, but the crowds there are [as good as] anything really. It's like a Tour de France stage, to be honest."

The Trek-Segafredo star had been the undisputed 'King of Willunga' for six years, has finished in the top two of the general classification every year since 2015 and is the fifth man to have won overall honours multiple times.

"Personally, I don't think it's really going to sink in until I retire, what I've done," Porte said.

"One of my good mates sent me a message saying 'Do it for Luca', who's my little boy. That's just the extra motivation that you need.

"Going forward, I don't know what my legacy is, but maybe I can come back to this race and enjoy it for what it is in a few years."