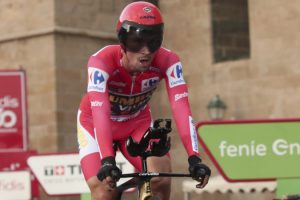 Primoz Roglic sealed his third straight Vuelta a Espana title after adding to his already comfortable lead by winning the final stage in Spain on Sunday.

It’s the first time an Australian has finished on the podium at the race since Cadel Evans in 2009. Haig entered the three-week event that played out in blistering hot conditions after fracturing his collarbone in a heavy crash during stage three of the Tour de France in June, which he was forced to abandon. 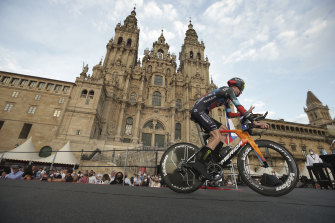 “It’s incredible,” Haig said of his finish at the Vuelta.

“I was just speaking to my wife saying how you always dream of getting on a podium at a grand tour, but I really never knew it was possible or not.

“It’s amazing to move to Bahrain Victorious and then having the crash at Tour and come here with no expectations, and be third on the podium. I have no words for it, and I want to thank everyone who got me here as it doesn’t just happen overnight. It’s not just a year’s work and there are so many people I’d like to thank along the way that helped me.

“I will keep approaching racing the way I do, as long as I’m happy with the right people around me and enjoy it. If you’ve got that, then the results come. I couldn’t be happier.”

Roglic increased his overall advantage over runner-up Enric Mas (Movistar) during the final stage – a 34 kilometre time trial from Padrón to Santiago de Compostela – to four minutes and 42 seconds.

It was the fourth stage win for the Jumbo-Visma leader at this edition of the Vuelta, including the first time trial on the opening stage. He took over the leader’s red jersey for good with a stellar performance in the high mountains over the final week. 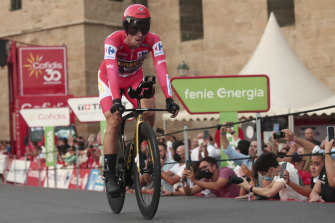 Roglic added to his 2019 and 2020 Vuelta titles less than six weeks after claiming gold for Slovenia in the time trial at the Tokyo Olympics.

“It’s the last stage and all this week was hard. Definitely I knew how I was on the way and still I enjoyed quite some support and crowd by the road,” Roglic said.

“I tried to focus on the stage. On the day itself I do my best, and then you see how it goes at the end.

“It’s unbelievable. It’s crazy. Sometimes you win by a lot and sometimes a little. As long as you can win it’s super nice. I’m not focusing on numbers, statistics or all these things. I go day by day and enjoy it, and I’m honoured to be in this place.” 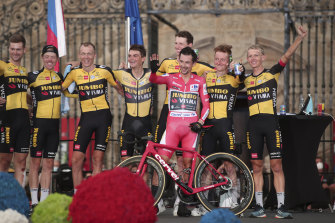 Fabio Jakobsen (Deceuninck-Quick-Step) claimed the green points jersey, a year after suffering from life-threatening injuries in a horrific, high-speed crash at the Tour of Poland.

“To finish here in Santiago de Compostela is my biggest victory. Who would have thought about this one year ago? As I came closer to the finish I was waving to the fans who were shouting my name, seeing them do this was really beautiful,” said Jakobsen.

“A hat-trick of stages and the green jersey is something I would have never dreamed of three weeks ago.”

Australian Michael Storer (DSM) won the King of the Mountains jersey at the end of a defining campaign in which the climber also claimed two stages.

“It’s more than I ever expected to do at this Vuelta,” Storer said.

“I’m really proud of myself and really proud of the team’s efforts as well. We’ve worked incredibly well together to bring this home. We literally have made each other better here. It’s been a really good Vuelta for us. This jersey is really one for the team. We are super happy.”