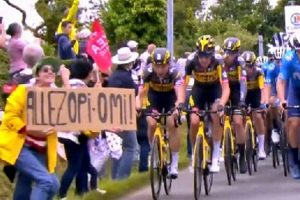 Brest: Prosecutors in the trial of a roadside spectator who caused a huge crash on the first stage of the Tour de France in June called on Thursday for a four-month suspended jail sentence, a lawyer for the riders’ union said.

The French woman, who has not been named, sent one cyclist tumbling to the ground, with dozens more falling as they rode into him, in a scene that grabbed global headlines. 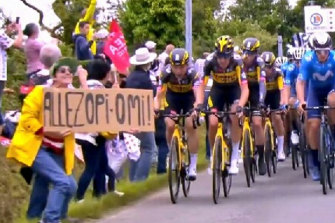 The scene just moments before a spectacular crash on the opening stage of this year’s Tour de France.Credit:Gendarmerie du Finistere

The woman, who turned herself in some days later, had been holding up a cardboard sign towards a television camera, while facing away from the oncoming cyclists.

The court will rule on the case on December 9, lawyer Romuald Palao, who represents the Professional Cyclists’ Association (CPA), which is party to the trial, told reporters after a hearing in the French city of Brest.

“What we want from this trial is that it helps ensure this does not happen again. Cycling is dangerous enough in itself, no need for additional risks,” Palao said. “People on the side of the road must act responsibly.”

He said the riders’ union would not hesitate to file more lawsuits if such incidents were to happen again, adding that spectators taking selfies or posing for pictures or videos needed to be wary of the cyclists’ safety.

The woman, whom prosecutors earlier said felt ashamed of what she had done, told the court on Thursday that holding the sign up was a mistake and that she regretted it.

She is accused of involuntarily causing injury and putting the life of others at risk.

A lawyer for the defendant declined to comment on the trial.

The Tour de France withdrew its own lawsuit in July, saying that while the safety of the race was key, the case had been blown out of proportion after it triggered a media frenzy. 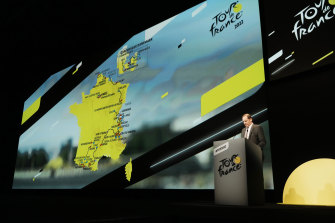 Tour de France organisers also on Thursday announced the route of the 2022 edition of the race, which will start with a 13km individual time trial in Copenhagen before the second stage takes the peloton over the 18km Great Belt bridge between the Danish islands of Zealand and Funen.

The women’s Tour will be revived next year and Christian Prudhomme, cycling director at Amaury Sport Organisation (ASO), said he hoped the race would survive him.

The women’s Tour had not been held since 1989 and will this year start from Paris and end eight days later at the top of the Super Planche des Belles Filles climb at the end of an eight-stage ride through eastern France.

Prudhomme, who is the men’s Tour director, said the biggest challenge was to make the race a financially sustainable event.

“If it had been (sustainable), the women’s Tour would have been held for 40 years,” he told reporters on Thursday ahead of a presentation ceremony for the 2022 men’s and women’s Tours.

“The biggest challenge is to broadcast the race. I think we’ve done a good job, with the race starting the same day as the men’s race ends in Paris,” Prudhomme said, adding the event would be broadcast in 170 countries.

The men’s race is broadcast in about 190 countries.

While more than 300 towns apply and pay to host a stage of the men’s Tour every year, Prudhomme had to approach candidates himself for the women’s race.

“But they are all paying an entry fee and to give you an element of comparison, it’s more than for (the week-long men’s stage races) Paris-Nice and the Criterium du Dauphine,” he added. 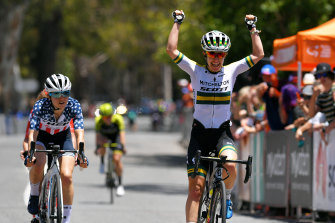 Road cyclist Amanda Spratt could be an Australian contender at the women’s Tour.Credit:Velo

“The goal is to organise a race that will stay, that will still exist in 100 years, that I can watch when I’m old and using a walker,” the 60-year-old Prudhomme said.

The 2022 women’s Tour will run from July 24-31, starting two weeks after the end of the longest women’s race on the calendar, the Giro Donne (July 1-10). Possible Australian women’s contenders could include Amanda Spratt, currently out of action following leg surgery, and Sarah Roy.

Double Tour champion Tadej Pogacar of Slovenia, who will be defending his men’s title, is very interested in the event.

“Probably when I finish my Tour, I’m going in a camper to see the women’s Tour,” he said. “It’s a historic moment for cycling, it’s going to be a great event.”

“When I was young I would watch the boys ride the Tour and now it’s going to be little girls watching girls take part in the Tour.”