The close friends and decorated Grand Tour stage winners have engaged in a running rivalry throughout the Australian summer of cycling. 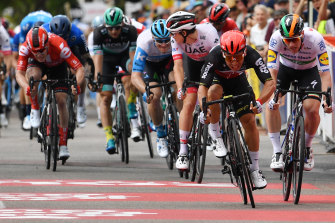 Sam Bennett, right, sprints against Caleb Ewan, left, at the Tour Down Under. Credit:AAP

It reached a peak on stage four of Tour Down Under last week, when Ewan pipped Bennett in a two-man charge to the finish line at Murray Bridge.

There could be more to come in Sunday’s 171km race in around Geelong, which is tipped to be decided by a reduced bunch sprint after four ascents of the Challambra climb.

‘‘[Ewan] is my training buddy at home and we’ve been having a bit of banter,’’ Bennett said.

‘‘We obviously both like to win, but there’s no bitterness. We like to see each other be successful and to progress.

‘‘I think we also lift each other’s game, don’t we? It’s great to have battles with him.’’

The personal contest for Tour Down Under stage wins in South Australia finished 2-1 in favour of Lotto-Soudal’s Ewan.

The Irishman Bennett (Deceuninck-Quick-Step) has since claimed the inaugural Race Torquay, edging out Giacomo Nizzolo (NTT) on Thursday after Ewan was one of many mid-race withdrawals in the warm- up event ahead of the Cadel Evans race.

But Bennett believes the Torquay win has given him a mental edge over his rivals.

‘‘It was good to open up the legs and get going, and good for the confidence as well,’’ Bennett said.

‘‘When the racing got harder, I felt better, so when I’m suffering on Sunday I just have to remind myself that the legs are there.’’

Italian star Viviani is still searching for his first win of the year after crashing hard on stage two at Tour Down Under.