Mitchelton-Scott sports director Matt White has weighed in on the mental health of professional cyclists, saying it's something that can be managed with the right resources after Rohan Dennis revealed the internal struggle that contributed to his walk-out of the Tour de France last year.

Dennis threw the topic back into the spotlight earlier this week at the Tour Down Under, where he said he'd abandoned an overarching career ambition to become a Grand Tour contender because of the effects it was having on his mental wellbeing and his family, and would instead focus on time trials and smaller stage races at his new team Ineos. 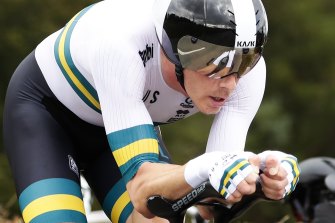 Earlier this week, Rohan Dennis revealed the reasons behind his early departure from the Tour de France last year.Credit:AP

Since signing Adam and Simon Yates as well as Esteban Chaves, Mitchelton-Scott has successfully changed its orientation from focusing on stage victories at Grand Tours to the overall classification, with Yates claiming the 2018 Vuelta a Espana.

Asked if there was a massive difference between riders who focus on overall victories at week-long stage races, like Down Under, versus three-week Grand Tours – the Vuelta, Giro d'Italia and Tour de France – White said: "Only in their pay packet!"

"[Dennis is] a great stage race rider but three-week stage races are not for everyone and I think the best decision for him is to go back to what he's best at, and that's winning time trials and winning stage races that have got a time trial where he can use his talents to win those races," White said.

"And look, I don't think the GC guys make too much more sacrifices than he would. OK, they might do some extra camps and some extra recon but, you know, he's not winning world time trial championships without making a lot of sacrifices."

WorldTour cycling teams each have their own culture – some supportive and open, some hardline – that riders have to navigate, taking into account nationality and language barriers, which can contribute to feelings of unrest on top of performance highs and lows, stemming from team environment, motivation, fatigue, form and results variance.

"Mental health, it's something everyone is aware of and I think to get the best out of your guys you've got to know the athletes. If you know the athletes it's always a better sign of picking something up like that if your people have got issues," White said.

Sports psychologist Dr David Spindler, who consults with Dennis, Australian Nathan Haas (Cofidis) and other WorldTour athletes, said issues at home and aspects like time management, at which he believes cyclists are poor compared to athletes from other codes, were talking points. He added performance anxiety and maladaptive eating were some of the biggest issues facing the sport. 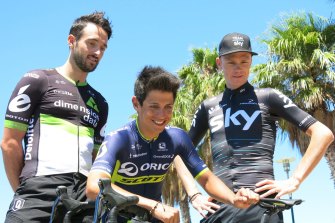 "Most people just don't understand how to get help. That's the big kicker," Spindler told Procycling magazine in March.

"What I'm getting now is a lot of athletes dumping because they've never had it [an outlet] before. A lot of it is how we can get the overall team to communicate with the athlete better."

Weight is a huge performance gain (four-time Tour de France champion Chris Froome once said his ideal race weight is 67kg and he is 186 centimetres tall) for cyclists in general but especially for Grand Tour contenders and finding the balance between that and happiness, even healthiness, can be a fine line.

Rod Ellingworth, one of the most respected and successful performance directors, managed four yellow jersey winners including Bradley Wiggins, Froome, Geraint Thomas and reigning victor Egan Bernal at Ineos (formerly Sky) up until his appointment as general manager of Bahrain-McLaren, the rebranded and revised team that sacked Dennis following his Tour exit, this season.

Ellingworth said the sacrifices cyclists have to make to pursue their goals were "massive", acknowledging the impact diet and the general demands of the sport can have on mental health.

"I've been fortunate enough to work with four Tour winners and they're all very different but the one common thing they have is the work ethic," Ellingworth told The Age at Down Under.

"Their work ethic is phenomenal, their mindset, they have to work really hard, but then within that each and every single one of them has moments of real challenges.

"Weight loss is a big one, we know that is such a big area and it is mentally challenging. For any of us to try and do that is a challenge. Taking on the leadership, taking on the media, whatever, you could categorise it all and be quite clear to say, 'this is going to be their biggest challenge'.

"But the whole mental game is a big area. It's all about goal-setting and being clear with how you do it and people being supported."

However, similarly to White, Ellingworth also emphasised the importance of choice, framing mental health as a manageable aspect rather than issue within the international sport.

"At the end of the day, you've got to be able to produce certain numbers to win the Tour de France. If you're not realistic with that then you're not going to win and I think that is where a lot of people perhaps go wrong is they're a bit unrealistic with expectations," he said.

"It's a challenge but it's what they want to do. You've got to remember that. Nobody is forcing them to do this, it's their choice in life. You can step out of the game at any time."