Australia’s Porte takes overall honours in the Tour Down Under

Richie Porte won a career second Tour Down Under on Sunday to reaffirm he is back in the winner's circle despite a British rookie pro interupting his unbeaten run on Willunga Hill.

Matthew Holmes in his first WorldTour race, and a day after he questioned his ability to hack cycling’s top-tier, outsprinted Porte (Trek-Segafredo) on the hill-top finish, with Manuele Boaro (Astana) finishing in third place. 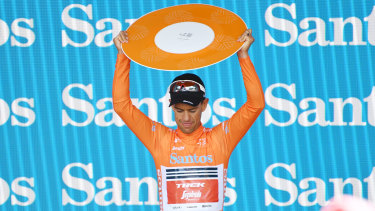 Riding high: Richie Porte celebrates on the podium after winning the overall title in the Tour Down Under.Credit:AAP

Holmes arrived at Lotto Soudal this year after eight seasons racing at Continental level on the British domestic scene.

“I’ve been trying my hardest to ride well in the GC but I couldn’t handle the speed and danger in the bunch so I really didn’t do well the first few days,” said Holmes.

“Even last night I was saying, ‘I don’t know if this is even for me. It’s too dangerous.’ So today is a bit of a turnaround.”

Holmes's victory at the end of the 151.5km sixth stage from McLaren Vale was an upset as Porte has celebrated line honours at Willunga on six consecutive occasions.

The 26-year-old was part of a 26-man breakaway that escaped less than 20km into the stage that defending champion Daryl Impey (Mitchelton-Scott) entered in the ochre leader’s jersey, holding a slender two second advantage over Porte.

Porte attacked on the final ascent of Willunga Hill, a little later than usual, with about 1km to go as he pursued the remaining riders up the road, a stage win and the race title.

Simon Yates (Mitchelton-Scott) couldn’t hang onto Porte’s wheel as the Australian surged again, catching Holmes with 500m remaining. Holmes sat on the Tasmanian’s wheel and then with 150m to go came around him.

“I rode hard, sensible and then had to go with Richie when he came past. He was going a hell of a lot quicker than me when he came up there so he had no sprint left,” Holmes said. 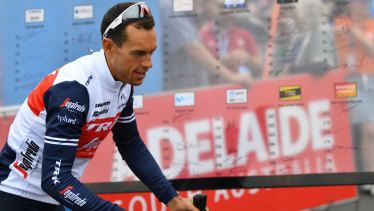 Getting set: Richie Porte at the start line on stage six of the Tour Down Under.Credit:AAP

“It was perfect, my old manager would be proud. He always had a go at me for doing too much so today I did absolutely the minimum. I probably had the easiest ride of anyone in the whole race.”

The overall victory for Porte capped off a solid week in which he also won the queen stage to Paracombe. The 34-year-old, who has scaled back his expectations for the Tour de France this year, took confidence from his performance after a tough run in Europe last season.

“It’s a fantastic way to start the year. Everyone has got their opinions on peaking and this and that, but being from Australia, to win the Tour Down Under, it’s a great satisfaction,” Porte said.

“I won’t let anybody take any of that away. I’ve worked hard for this and now I know I can still win bikes races so it’s good for the season coming.”

Porte thanked his teammates, including road world champion Mads Pedersen,  for keeping him in contention.

"It was a hard day for our team. There were times when I thought the GC was over and done with because it was a big group up the road but credit to the guys, they pretty much single handedly brought that all back,” said Porte.

“I knew I was out of it there once I got dropped. I just kept fighting to the line to try and limit the damage and finish on the podium,” said Impey.

“I wasn’t on a great day today. I struggled a little bit there on the bottom slopes and probably paying for quite a busy week. I’m still happy with the performance. Obviously disappointed today, I would have liked more, but that’s how it goes.

“I don’t want to look for excuses. Richie has proven he was the best climber here. Going into today’s stage I would have preferred a 20-second buffer like we usually come with but it was a lot closer this year.”