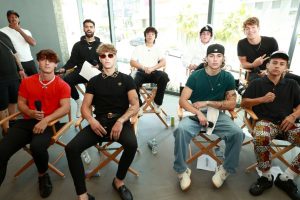 The stars of YouTube and Tik Tok will square off for an amateur boxing showcase in Miami tonight – and some of them will be paid handsomely to do so.

Bryce Hall, who competes in the main event against Austin McBroom, has claimed that he is earning an eye-watering $5million as a base purse, more than double what Khabib Nurmagomedov earned to beat Conor McGregor in the biggest UFC fight ever in 2018.

He has also said he will earn 4 per cent of the event's pay-per-view sales, and a knockout bonus of $1m should he stop McBroom at the Hard Rock Stadium.

Hall has previously said that he only agreed to do the fight if he were able to earn a considerably higher purse than his opponent, who initially tabled the deal.

The exorbitant sum of money amounts to almost double both Kamaru Usman and Francis Ngannou's most recent UFC title fight purses put together.

It means that the promotion must be confident of pay-per-view sales reaching similar numbers to Logan Paul's recent bout with Floyd Mayweather and Jake's fight with Ben Askren.

Those two events sold around 1 and 1.5m respectively, netting promoters and fighters huge amounts of cash.

But the Paul brothers both were not guaranteed anything close to what Hall is claiming, and Logan barely scraped that after sales figures came in for his exhibition with Mayweather.

He made 10 per cent of the PPV, as well as a $250,000 base purse, which could have meant he fell far below the $5m figure if PPV sales had flattered to deceive.

And his brother Jake only earned a base fee of $690,000 for his bout with Askren, which ended up netting him a lot more than $5m when his cut of the top 10 PPV buys came in.

The exact figure is not known, but it appears that he made somewhere in the region of $10m assuming he got a decent chunk of the $75m made from the event, which was promoted by Triller Fight Club.

Logan Paul made a guaranteed $900,000 for his fight with KSI, who also made that amount, in November 2019, but due to the fight being on DAZN, it is unsure what percentage of new subscribers or international PPV sales they made.

It is generally believed that they made deep into the millions, but no exact figure has ever been put out.

AnEsonGib, who fights in the co-main event on Saturday, had branded himself 'seven-figure Gibber' ahead of his bout with Jake Paul in January 2020, and reportedly made something around that figure, likely tipped over the $900,000 mark by sponsorship deals.

But he will earn a significant amount less than that when he faces Tayler Holder.

Both he and Holder will likely make a solid amount from the event, and the winner will garner millions of views on their social media platforms which will lead to further sponsorships down the line.