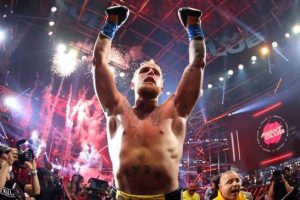 Paul, the YouTube star-turned boxer, sent Ben Askren to the canvas with a straight right hand midway through the first round of their cruiserweight fight. Even though Askren got up, referee Brian Stutts decided Askren couldn’t go on, giving Paul a first-round knockout at 1:59 in the first round.

Paul (3-0, 3 KO), then collapsed to the canvas in tears before celebrating and doing pushups in the ring. The 24-year-old Paul took care of Askren quickly. He was patient for the first minute while Askren chased him around the ring.

Then, as Paul began to get comfortable, he made quick work of the 36-year-old Askren. He set up the straight right with a jab and the solid contact sent Askren down. After the fight, Paul climbed up into the broadcast booth to celebrate with Snoop Dogg.

“It’s been four months. I’ve been in training camp every day,” Paul said on Triller after the fight. “I deserved that s—. This is the craziest moment of my life.

“I told y’all I was going to do it in the first round. I told y’all I’m a real fighter. I don’t know how many times I’ve got to prove myself this is for real.”

Paul landed 9 of 26 punches in the fight while Askren landed 3 of 14 punches. It was the last two of Paul’s punches which did the most damage. Paul told Snoop Dogg after the fight he didn’t even get a chance to really get warmed up.

This came months after Paul knocked out former basketball player Nate Robinson in the first round with a viral knockout during Triller’s first fight on the undercard of the Mike Tyson-Roy Jones Jr. main event in November.

Paul’s entrance, where he walked into the ring with some sort of fake robot accompanying him, might have lasted longer than the fight itself. Paul’s win capped a night that was a complete spectacle.

It featured a literal slap fight, performances by The Black Keys, Doja Cat, Ice Cube, Mount Westmore and Justin Bieber. Roving reporter/comedian Pete Davidson stole the show, making fun of everyone and everything.

After the fight, Paul said he dedicated it to his security guard, who died 10 days ago. It was part of a news-heavy week for Paul, who was also accused by TikTok star Justine Paradise of forcing her to perform a sex act without consent in 2019. Paul’s attorney told ESPN earlier this week that Paul “categorically denies the allegation.”

Boxing was secondary throughout the majority of the night as musician-after-musician performed, with one fight over the first two hours of the Pay Per View — a bout lasting two rounds as Reykon refused to come out of the corner for the third round against Joe Fournier.

Otherwise it was music and skits – the show opened with a skit with Snoop Dogg and Jaleel White playing his iconic role as Steve Urkel joking about marijuana – with very little actual fighting going on in the fight club.

Snoop Dogg and and Ice Cube also honored DMX and Marvin Hagler during the show, including a video honoring the late rapper.

Even the fight featuring the most well-known prospect, Regis Prograis, ended in controversy after his opponent, Ivan Redkach, was taken out of the ring on a stretcher after a punch from Prograis in the sixth round.