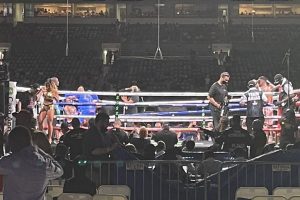 As if it wasn’t already farcical enough, Floyd Mayweather and Logan Paul’s parade was literally rained on before they’d even stepped into the ring.

A storm caused chaos on the undercard of the pair’s showdown with a fight forced to stop in the middle of the contest because of wet weather.

A heavy shower resulted in water covering the ring, making it unsafe for the thrilling rollercoaster between Jarrett Hurd and Luis Arias to continue.

The event is taking place at the Hard Rock Stadium in Florida — an open-air stadium used by NFL team the Miami Dolphins.

The referee called a stop and demanded officials use towels to dry the ring, particularly a slippery piece of advertising in the middle of the ring.

After a delay of several minutes, the fight was able to continue — only for it to be stopped two more times.

“It’s raining at the fight and the there is a timeout to mop up the ring. What a mess,” he posted on Twitter.

Later, when Hurd was knocked down, fans questioned if it was genuine or just because he slipped on the wet mat.

“The knockdown Hurd got in rd 9 was definitely a slip,” Rafael tweeted. “Bulls**t call. Mat was wet. Arias is winning but if that knockdown means anything that’s horrible.

“This is surreal to watch. Raining like crazy. Stadium empty. But they’re putting on a show.”

The weather forecast and scenes of fighters repeatedly slipping over cast a shadow over the event just minutes away from Mayweather and Paul walking out to the ring.

The internet was quick to make fun of the absolute shambles.

“We need some ring logos that really stick out.” #MayweatherPaulpic.twitter.com/OcN3Ypgpnu