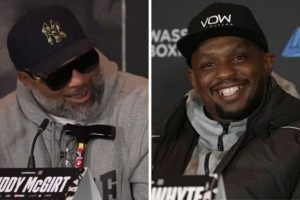 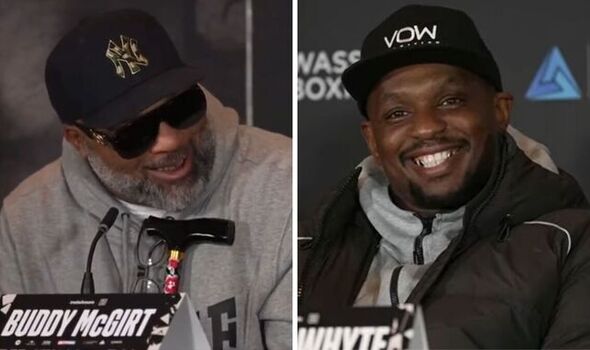 Dillian Whyte’s new trainer Buddy McGirt has admitted to never watching a single one of The Body Snatcher’s fights. The legendary American coach has worked with a number of former world champions including Sergey Kovalev, Arturo Gatti, and Hasim Rahman but never watches any tape in the lead-up to fight night.

McGirt has been brought into the fold by Whyte ahead of his must-win clash against Jermaine Franklin this weekend. The victor is expected to go on and face Anthony Joshua in early 2023 as he makes his return to the ring.

During the pre-fight press conference, McGirt was asked about what he had seen when studying Franklin. Much to the surprise of many, McGirt affirmed that he’s never seen the American box nor his own fighter.

“I believe if you prepare for one thing, you see something and you look for it and doesn’t happen in the fight – it’s too damn late. But if you’re prepared for any and everything no matter what the other guy does, you’ve got an answer for it and that’s the key.

“Here’s the funny part, I’ve never seen Dillian fight either,” he laughed. “I had to deal with him for the last six weeks and that’s enough. But look, we had a great training camp, we aren’t expecting an easy fight, I believe there’s no such thing as an easy fight, especially at this stage in the game.

“You’ve got to be ready for any and everything and we’ve done that. Well, Dillian’s done that because when the bell rings, he takes three steps in, and I take three steps out.”

Whyte’s opponent, Franklin, is 21-0 as a professional boxer and holds decent wins over experienced gatekeepers Jerry Forrest and Rydell Booker. The 29-year-old has never boxed anyone near Whyte’s level but is well thought of by American sports writers.

This fight will be the true test of how high his ceiling is and with a reported seven-figure AJ contract on the line, Franklin will be hoping to pull off the upset in front of the Brit’s home crowd.