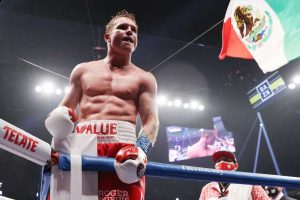 Canelo Alvarez is staying busy with his second fight in just over two months Saturday night.

Alvarez (54-1-2, 36 KOs) is in a quick turnaround for this fight, last fighting — and defeating — Callum Smith in a super middleweight clash this past December. The win bout was Canelo’s first in over a year, following his 12-round unanimous decision win over Sergey Kovalev in November 2019.

While the future in Canelo fights isn’t immediately apparent, Alvarez’s sights are set on Turkish fighter Avni Yildirim in Miami, Fla. this weekend. Yildirim has just two losses in his boxing career, but hasn’t fought since a technical decision loss to Anthony Dirrell in February 2019.

Canelo and Yildirim will do battle over the WBA, WBC and The Ring super middleweight titles in South Beach. Here’s what you need to know about the Saturday night fight:

What time is Canelo vs. Yildirim?

The main card for Canelo vs. Yildirim is scheduled to begin at 7 p.m. ET. Canelo and Yildirim are expected to take the ring at around 10 p.m. ET.

The main event time is seldom if ever pushed up regardless of prior card results, so expect the duo to take the ring around 10 on the east coast.

How to watch Canelo vs. Yildirim

As with all Canelo fights, you’ll be able to live stream Canelo vs. Yildirim live on DAZN.

DAZN can be found on across video game consoles including PlayStation 4/5, Xbox One/Series X, smart TV apps, and is broadcast globally in over 200 countries.

How much does Canelo vs. Yildirim cost?

Those hoping to stream the Canelo vs. Yildirim fight can sign up for DAZN for a monthly cost of $19.99, or for a discounted subscription of $99.99 for the year.

Depending on cable/satellite provider, you will be able to buy the bout via PPV for $49.99. Taxes and fees are not included.

Where is Canelo vs. Yildirim fight taking place?

Hard Rock Stadium in Miami Gardens, Fla., will host the fight. This will be the first time either Alvarez or Yildirim will be fighting in the state of Florida.

Heading into Friday weigh-ins, there will be a eight-fight card