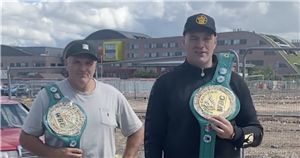 John Fury has slammed his son Tyson's team in America, saying that he has become "a bit one-dimensional" as he trains for a minute before chatting for two.

And his dad has said that as long as he gets his head down over the next two months and works with the right people, Tyson should handily defeat Wilder within five rounds.

"He's out there and he's not under the watchful eye, he's around all these yes men when he gets out," Fury's father told BT Sport in a candid interview

"Because when he gets off the plane in Las Vegas, you've got 200 yes men waiting for him looking to get that from him.

"Because he's the Pied Piper, ain't he? That's what he does. People follow him around just to get what they can and they're saying 'Yes, Tyson. You're this, you're that, you're the best in the world. We love you.'

"This kid's heard it all before in my life – they don't love ya, they don't care ya, they just want your money and your profile to make their status bigger for being around you."

Fury will spend four weeks in Manchester before returning to the States to finish him camp, and his father has been getting rid of hangers-on in his camp.

"I don't want all them fake plastic pretenders around me," John continued. "Because you know that size 12, it goes right up their backside.

"That's what happens when you're around me, get down that road; 'What are you bringing to my son's table?' If it's not relevant, you're gone.

"But Tyson's not like that, he just hasn't got that character, but I have and you need people like me, somebody's got to point the finger at the bad guy.

"Tony Montana said that in the film Scarface. Point it at me, but I am the bad guy because I'm getting that boot up the backside and down the road, gone.

"Because they're not relevant to his job. Or he'll get beat, he needs to work, like we're working in here.

"One-to-one, a select few people around him who he can trust and work and work again."

If the elder Fury, who is also father to Love Island star Tommy, had his way he would have Tyson mix up his hard-hitting Kronk Gym style with the boxing prowess he showed during his first run to the title and his return under Ben Davison.

Fury was able to comprehensively outbox Wilder in their first fight, but decided to go in much more aggressive in their rematch and brutally stopped the American in the seventh round.

But first for John, he says, is to get him back to full sharpness, which he claims he has lost during his time in America, which included a coronavirus outbreak in his gym.

"Get it all right and shed blood, snot and tears in the gym," John continued. "I don't see him doing that today.

"I watch him in America doing a minute on the pads and being talked to afterwards, you know what they'll do: they'll do a minute's work and talk for two minutes.

"And I've witnessed it firsthand and I've thought to myself, 'You know what? This ain't making sense to me, and he's sort of lost his bit of movement that he had, for my money.

"He used to be elusive, he used to be awkward, coming at you from all different styles. He's gone a bit one dimensional."