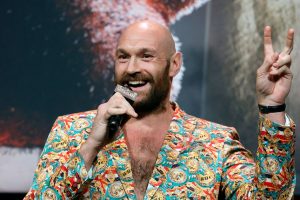 Tyson Fury claims he's been offered a contract by a major record label and is seriously considering accepting it.

The undefeated Gypsy King hung up his gloves in April after cruising past Dillian Whyte to retain his WBC and The Ring heavyweight titles at Wembley Stadium.

Despite thunderous calls from fans for him to return to face the winner of Anthony Joshua vs Oleksandr Usyk, the 33-year-old has thus far resisted, insisting he's enjoying life away from the ring too much to think about a U-turn, and speaking to Pitch Boxing's Gareth A. Davies, even teased a switch into the music business.

"[Retirement has] been good, I've had a really good time. I’m about to get busy on tour and there’s a lot of exciting things going on," said Fury.

"I’ve been offered a record deal actually. By one of the most famous companies in the world. So I’ve got some exciting stuff coming up."

Asked if he was going to accept the deal, Fury said: "Might do, yeah. I’ve not agreed to it yet, but I’m taking it into consideration."

Which singer would you most like to see Tyson Fury punch in the face? Let us know in the comment section below

In fairness to Fury he's no stranger to getting on the mic. After beating Deontay Wilder in 2020 he serenaded the Las Vegas crowd with a decent rendition of Don McClean's famous hit 'American Pie' – which caught the American singer-songwriter's attention.

"I did a little bit with Robbie Williams and I’ve done a little duet with Don McClean," Fury added. "We won six awards for that duet, by the way. I’m just contemplating on who I want to sing with next.

Whatever Fury does next it'll undoubtedly be box office, but the prospect of a title unification fight against either Joshua or Usyk has a little more appeal than him tagging along on Ed Sheeran's '=' tour, don't you think?