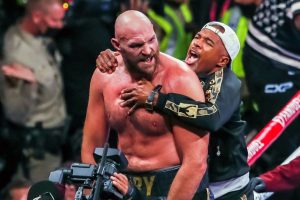 Tyson Fury has been offered a role in the new Expendables film by acting royalty Sylvester Stallone.

The 'Gypsy King' produced a Rocky-style performance climbing from the canvas twice to defeat Deontay Wilder in their Las Vegas trilogy.

And he has since received many impressed messages of congratulations, including one from Stallone.

Stallone sent a video to Fury paying tribute to his victory and called for the 33-year-old to be cast on the latest version of the action flick.

“It couldn’t happen to a better guy, Stallone said. “I think you have a fantastic career in movies. So, the next Expendables? Done deal!”

The former Rambo actor continued on an Instagram post: "Hey super congratulations to Tyson Fury for that incredible display of championship strength, guts and courage! Also tremendous respect to Deontay Wilder who proved to be a warrior on the night.

Fury remains one of the sport's leading personalities having once again impressed in front of a bumper crowd across the Atlantic.

And he also preserved his undefeated record with his reign as the leading heavyweight continuing.

But despite his status, Fury has hinted at potential retirement after ending his long-standing trilogy with bitter rival Wilder.

The comments could signal a collapse of a domestic showdown with Dillian Whyte who is awaiting confirmation of his mandatory status from the WBC.

“I don’t know what’s going to happen," Fury told The Telegraph. “I’ve got one fight left on my contract with Top Rank and ESPN and we’ll see what that is.

HAVE YOUR SAY! Can anyone beat Fury? Let us know who you think has a chance in the comments section

“I am motivated to get up in the morning, do a little bit of training, and enjoy my day. I don’t have any goals in boxing, I have done everything and won everything, the only one to do it in my era.

“I will always have been the WBC, WBA, WBO, IBF, Ring magazine champion, that will not evaporate in history, but once it is done, it is done and you cannot get it back."

Fury's wife Paris has previously reiterated her own desire for the champion to retire although encouraging him to first face Anthony Joshua.

And his promoter Frank Warren has confirmed interest still remains in pursuing a historic British fight with 'AJ', particularly if he can secure a turnaround victory over Oleksandr Usyk in their rematch.

JOSHUA: AJ told his confidence is "ruined" and is "scared" of being hit

The No.1 ranked heavyweight has also been told by his father John to only pursue a clash with Usyk, who he believes is the only other capable competitor.

Fury has been warned by former junior welterweight champion Chris Algieri of the "trouble" he could face in an undisputed test with the Ukrainian next year.

Wilder is reportedly also keen to renew his rivalry with Fury in the future and could eye a fourth meeting upon his ring return.