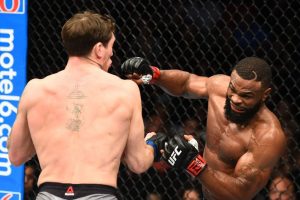 Tyron Woodley has made a violent promise to end Jake Paul's fighting career when they meet in the ring later this year.

Former UFC welterweight champion Woodley will square off with YouTube star Paul on August 28 after terms were agreed this week.

And he has vowed to rid Paul from combat sports while earning a career-high payday in the process.

"Basically, they brought me in to take out the trash, I can't wait to shut this b**** up.

"This is getting done for the culture, the whole MMA community and boxing community, to rid this guy from combat sports."

On Thursday, the pair will meet for the first time since Woodley cornered Ben Askren in his fight with Paul earlier this year.

The rivals will face off as part of the festivities on fight week for Jake's brother Logan's exhibition bout with Floyd Mayweather on Sunday.

Paul and Woodley were involved in an altercation in the dressing room ahead of Paul's bout with Askren, when the YouTube star and boxer J'Leon Love taunted Woodley for his lack on boxing experience.

Woodley will be the fourth boxing debutant that Paul has faced in his pro career, but he is expected to be a considerable step up in competition for the former Disney Channel star.

The former UFC title holder, who was a two-time NCAA All-American wrestler before starting MMA, has been training with veteran trainer Eric Brown, best known for coaching Paulie Malignaggi and working out of Freddie Roach's wildcard gym.

But Paul has opened as a favourite with bookmakers due to his superior boxing experience which includes three bouts in the last year-and-a-half to Woodley's none.

Woodley lost his last four UFC bouts including a title fight with Kamaru Usman, and seeked his release to pursue a boxing match with Paul.

"I have a list of people I plan on knocking out and as I enter my fourth pro fight, I am excited to cross the first one off the list by challenging myself against Tyron Woodley; a 5 time UFC Champion known for his knockout power.

"Tyron ran his mouth a little too much in the locker room when I knocked out his best friend Ben," Paul continued. "[He] earned himself a top spot on the Problem Child death list.

"Tyron’s a seasoned striker who has fought the best MMA fighters in the world but will be dropped by a Disney teen star in 2 rounds.

"Maybe this time Dana White will actually be a man of his word and put his money on his former champion instead of trying to undermine my success like a jealous ex. Influencer vs MMA….let’s get it on. It’s Showtime."