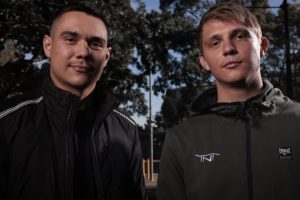 For very different reasons, the Tszyu brothers have struggled to lock down an opponent.

In Tim’s case, his target is Jermell Charlo, the undisputed champion who has agreed to fight both the Australian and another mandatory challenger, Russian Bakhram Murtazaliev, as his next opponent. Boxing politics will dictate what comes next, although Tszyu’s promoters, No Limit, are confident a positive outcome will be reached within a week.

Working in Tszyu’s favour is that he is a more attractive proposition to Charlo, as evidenced by the fact that Murtazaliev was the B-side when the “Soul Taker” defeated Terrell Gausha during his American debut earlier this year.

“Bakhram was a couple of fights after me, when they were taking out the seats,” Tszyu said. “Seeing it from a seller’s point of view, me and Charlo makes sense.”

Nikita Tszyu, meanwhile, has had issues of his own luring people into the ring. After making short work of his opponents during his first two professional fights – both ended in first-round knockdowns – potential adversaries have dodged the contest.

An exception has been found in Ben Horn, the brother of former Australian world champion Jeff Horn. Given that Tim Tszyu famously defeated Jeff Horn two years ago, the latest fight has been billed “The Battle of the Brothers”. 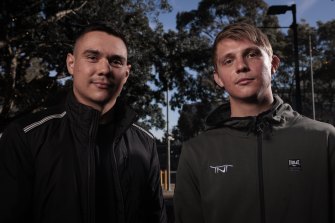 Tim and Nikita Tszyu at the promo for the upcoming Battle of the Brothers.Credit:SMH

The clash, to be held at the Hordern Pavilion on July 20, will be a chance for Ben Horn to avenge his brother’s loss.

“The way I look at it, I’ve got to get one back up on the family name,” Ben Horn said. “Let’s try to make it one-all. I like a challenge, that’s why I’m here. All the other people say they’ll fight him and pull the pin, I won’t do that. I will fight and I will come and wreck the party, that’s what I’m doing.”

Nikita said he was looking forward to continuing the rivalry between the families.

“He’s a tough bloke and it’s kind of cool that the brothers are fighting now,” Nikita said before adding: “There is a bit of a psycho in me when the gloves come on. I’m a different person in different situations.

“I kind of wish I had a bit more [of a challenge from opponents] but it’s nice the fights are ending pretty quickly. As [rising American boxer] Jaron Ennis said, we don’t get paid for overtime in this sport. We end them early and that’s the business.”

Tim has been impressed with the knockout power of his brother, but said it was too early to declare how far he could go in the sport.

“Nothing yet, he’s only done two rounds. It’s not even one fight of mine,” he said. “He’s got a long way to go. At the moment we can’t say anything besides he can hurt people. That’s what he’s been doing, he’s got heavy hands. He’s got a lot more to prove than just heavy hands.”

Asked if Nikita also had the potential to fight for world titles in the future, Tim said: “He’s got the mindset, he’s got the skills. Time will tell.

“I believe in him. He’s got the grind, he’s fully focused, fully motivated. He’s got all of it, but it’s too early to say. He’s a rookie, he’s six minutes in the ring.”