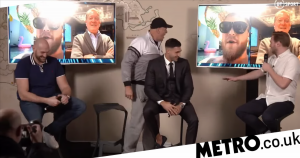 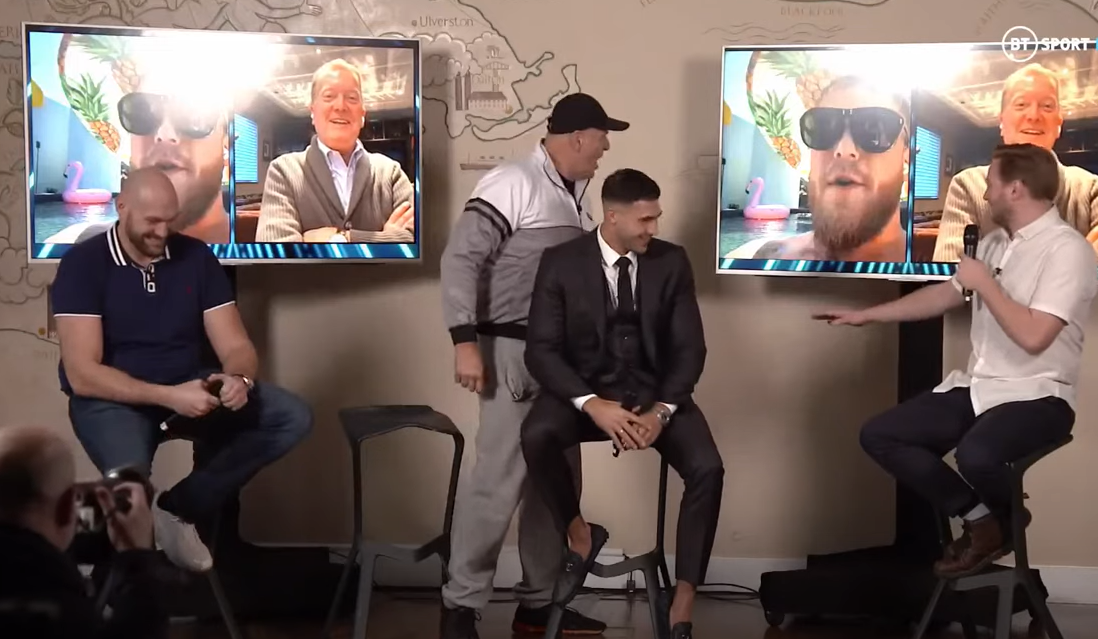 The Fury family and Jake Paul swapped wild insults during a chaotic press conference ahead of Tommy’s showdown with the YouTube star this month.

Fury and Paul meet on 18 December in Florida with the 7-0 prospect joined by his father John and brother Tyson on Wednesday.

Paul was not present in the studio, instead tuning in via video link from the comfort of his swimming pool in Puerto Rico.

Tommy and Tyson briefly took a backseat as John and Paul swiftly got into a heated exchange with promoter Frank Warren, also joining via video, forced to play peacemaker.

John Fury squared up to the television screen during the tirade, furious with Paul’s decision to do the press conference wearing sunglasses.

‘You thank your lucky stars that I’m banned from your country’, John Fury told Paul, before warning he would ‘spank’ him if he were to get hold of him.

Tyson branded Jake Paul a ‘w****r’ as the insults continued with Paul insisting he has earned more money in boxing than the heavyweight world champion this year.

Paul then urged Tyson to take his brother’s half of the fight purse for promoting the contest better than Tommy.

With the video link struggling, Tommy advised his opponent to seek a better broadband package.

Things took a turn for the worse however when John made derogatory comments over Paul’s girlfriend Julia Rose.

Much of the farcical press conference was intelligible and unrepeatable, with Tyson signing off with: ‘Can we wrap up then? Before my dad gets himself into a world of trouble.’