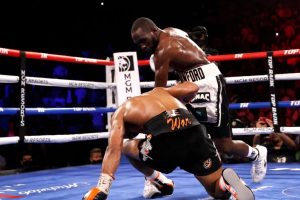 Terence Crawford’s defense of his WBO welterweight championship against Shawn Porter on Saturday was slated as his biggest challenge to date. Crawford, ESPN’s No. 2 pound-for-pound boxer, entered the bout in Las Vegas, Nevada, with a perfect 37-0 record, including 28 knockouts, under his belt.

He once again left no doubt. Crawford finished Porter in the tenth round via TKO, quieting the critics who have doubted how he’d perform against a top talent in the sport. He knocked down Porter twice in the round and Porter’s corner requested to stop the fight.

The Omaha, Nebraska, native has held the WBO welterweight title since June 2018 and has eyes on further unification if he’s able to get the other big fights in the welterweight division.

Boxing fans around the world reacted quickly to the championship moment on social media. Here’s what some of the world’s biggest athletes and top boxers had to say about Crawford’s win.