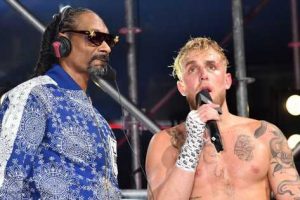 The YouTube sensation, 24, continued his fine form in the ring with a quick win over the ex-UFC star.

Legendary rapper Snoop Dogg has always been confident Paul would deliver on the night – and offered White, who was heavily behind Askren, a big wager.

In an Instagram video, Snoop said: "Hey Dana White, I see you got faith in your boy, right? Going up against my guy, Jake.

"You say you got a million? You're the CEO of UFC, man. You've got more than a million. Put up two – put up two million and we'll match it.

"Come on Dana, what you waiting on?

"Your money good. Yeah, I got Jake. Fight night. That's my guy, that's my dog in the fight. Two million. Holla at me, Dana White."

Snoop Dogg was on commentary duty during the fight and after interviewing the winner, the rapper began screaming down the mic, demanding his money from White.

"Where's my money at? Dana, where my money at?" he yelled as the Triller broadcast ended.

But it is unclear if the bet was even made – or if White agreed to the terms.

The UFC chief isn't convinced allowing celebrities into the fight game is wise – and for that reason, he was backing Askren to beat the internet celebrity.

He continued: "I hope you can bet on this thing, cause I'll bet a million dollars that he loses this f***ing fight.

"Bet a million dollars that he loses this fight. I hope we can bet on this."