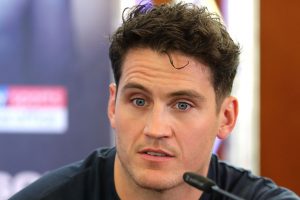 Shane McGuigan wants to train a fighter to become a world heavyweight champion now he has teamed up with Daniel Dubois.

The Kent-based trainer and son of ring legend Barry believes he can be the man to guide Dubois to the top as the pair prepare for their first fight together tonight when 'Dynamite' takes on Bogdan Dinu.

But the ambitious coach is now looking for success in the sport's glamour division.

He said: “I would like to go through all the divisions but heavyweight is the creme de la creme of boxing.

“Floyd Mayweather and Manny Pacquiao made welterweight the go-to division but it has switched back to heavyweight and if I can train a world champion there it would be huge for me.

“I've had a super-bantamweight champion, featherweight, light-welterweight, super-middleweight and also cruiserweight with Lawrence.

“Having an undisputed champion would be nice though as well though, I feel i did 90 per cent of that and just missed it with Josh.”

McGuigan may be only 32 and a young trainer but he is nine years older than Dubois having previously trained fighters around his own age.

And he believes he can be a father figure in the gym for the rising star, who is looking to get back to winning ways following his November defeat by Joyce.

“I have always been on the same wavelengths as my fighters because I am only 32 now,” he said.

“I am nearly a decade older than Dan now but he is quite an old soul.

“I might have to put my arm around him and mentor him a bit but we have only had three weeks together so far so I am not sure what makes him tick yet.”

But McGuigan is confident no-frills Dubois, who still doesn't have a smartphone, will fit in at his gym at the University of Kent.

“I know Dan is very mature, he only has a burner phone, no internet, he is a throwback and those fewer distractions could be a good thing,” said McGuigan.

“For the next camp we will try to get him to base himself down with us.

“He has got a very funny side of him that people haven't seen yet and I hope he uses that because it is marketable and it is appealing, the more people that relate to him the better.”