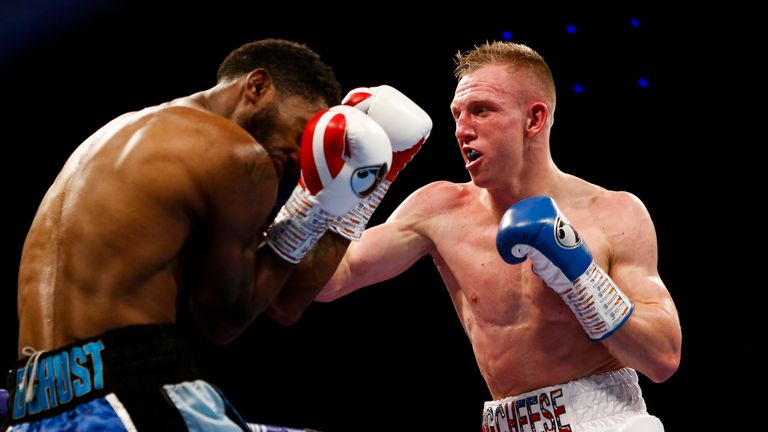 Ted Cheeseman worked at a relentless pace to out-fight Asinia Byfield and claim the vacant British super-welterweight title at the Copper Box.

There was a lot of needle in the build-up to the domestic showdown and, with an electrifying atmosphere inside the London arena, it culminated in an all-action battle for the Lonsdale belt, Cheeseman taking a unanimous decision via scores of 117-110 and 117-111 twice.

Byfield did come out to get the better of the opening three minutes, producing the better work behind an awkward switch-hitting stance, but from there on in it was all Cheeseman.

The 22-year old Bermondsey man exploded into range in the second, wheeling in heavy thudding blows to the body, setting the tone for the title fight, as Byfield struggled to keep him at bay. That punishing body assault continued in the next, ‘The Big Cheese’, roared on by the crowd, working at a relentless pace to totally outwork and overwhelm his Reading counterpart.

The fourth saw the Londoner back Byfield back up onto the ropes for most of the round as he constantly hammered away with combinations, ‘The Ghost’ slowly wilting, somewhat relieved to hear the bell.

Two heavy right hands then dumped him on the canvas in the next and Cheeseman, unsurprisingly, went on the hunt, raining in a barrage of punches but the Reading man valiantly stayed on his feet and staggered back to his corner. After taking more punishment in the sixth, Byfield started to find some success in the succeeding rounds, trading up close as both men went hell for leather on the inside. Despite his best efforts though, the Bermondsey man remained undeterred and refused to go onto the back-foot.

More thudding shots to the ribs rained in during the ninth as ‘The Ghost’ laboured with fatigue and the fight took a similar pattern in the tenth.

A series of massive uppercuts crashed home as Cheeseman again produced the better work in the 11th, but again Byfield fired back and he gave it everything he had in the final three minutes to, with tremendous effort, take things to the scorecards.