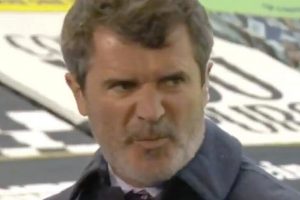 Roy Keane has slammed both Anthony Joshua and Tyson Fury for "talking too much" instead of finally stepping into the ring together.

The football legend, who made his name playing with Manchester United, is a big boxing fan, but he doesn't like the two current heavyweight champions.

Speaking with former teammate Gary Neville in a game of quickfire questions for his show The Overlap, Keane said that the pair get on his nerves, despite loving the sport.

“I don’t like any of them,” Keane told Neville when asked who his favourite of the two is. “The heavyweight stuff is irritating me, too much talk.

“None of them. They both irritate me; I’m not picking any of them.”

Keane is a massive fan of the sport, and famously was one of the first to contact Irish boxer Katie Taylor at her lowest point after losing out on a medal at the 2016 Olympics.

At the lowest ebb in her career, the ex-Sunderland manager was the first person to pick up the phone and call her up, which is a moment which stuck with her through her now historic pro career.

“When I lost in the Rio Olympics, the first phone call I got was actually from Roy Keane,” Taylor told the Daily Mail in an interview in 2019.

“He said, ‘keep your head up’. And he was very, very positive and that really does make my heart so happy.

“He went out of his way, and it meant so much to me that one of my heroes, someone who I really looked up to as a child, gave me a call at the lowest point of my career.

“They’re the things you don’t see. He has a great heart. And he’s someone who doesn’t look for any limelight for those sorts of things. It was just out of the goodness of his heart.”

Keane's dislike for Fury and Joshua is shared by a number of hardcore fans, who very nearly got to see the fight this summer, but missed out due to a legal issue on Fury's end.

Contracts were signed and moves being made to officially announce the undisputed title fight for August 14 in Saudi Arabia.

But after Fury lost an arbitration case to Deontay Wilder, he was forced to organise a trilogy fight with the American.

And instead of offering a step aside deal to Wilder, his promoters Bob Arum and Frank Warren decided to immediately organise a Las Vegas fight with Wilder for July 24.

In a further delay for the world title picture, Fury tested positive for coronavirus during camp which caused the bout to be moved to October 9.

While that drama was happening in America with Fury, Joshua has gone ahead and booked in a fight with mandatory challenger Oleksandr Usyk.

Usyk is a legendary former undisputed cruiserweight champion, who also won gold at the London 2012 Olympics where Joshua made his name.

The bout goes down on September 25, with the winner expected to face the winner of Fury and Joshua in early 2022.