Home » Parker-Fa boxing farce slammed as ‘disgrace of all disgraces’

Parker-Fa boxing farce slammed as ‘disgrace of all disgraces’ 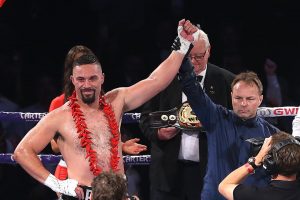 The former WBO titleholder was expected to claim the victory over the undefeated Fa but amid countless clinches and a largely even match, many believed it would head right down to the wire if it went to the cards.

One of the commentators said “Sorry, 119-109, one of those judges needs a new prescription”.

The Athletic’s boxing insider Mike Coppinger called the 119-109 card “outrageous” adding “seemed like a close fight. Certainly not a memorable one”.

The fight was held at close quarters.Source:Getty Images

US boxing producer Mark Ortega called it “One of the worst meaningful heavyweight fights I’ve seen in a while but it might just be because it’s 3 AM.”

I don’t want to see anyone on the streets, but the judge who scored that 119-109 to Parker needs sacking. That is a disgrace of all disgraces. Draw fair result for me, 1/2 either way could be argued. But that’s disgusting. #ParkerVsFa#boxing

Parker was far too predictable with his work. Constantly looking for the over hand right. You need to set traps in this game. Fa has a nightmare of a style. Very scrappy fight.

Judging by his face I think Parker thought he’d lost. He’s always going to be stuck in that second tier rung of fighters sadly.

That was a CLOSE fight. I don’t have a problem with Joe getting the nod, but 2 out of the 3 cards were absolute TRASH!!!! Proud of Junior who showed he belongs with the top guys. #ParkerFa#boxing

There was more holding in the Joseph Parker vs Junior Fa fight than most relationships.

Before the fight even happened, Parker was eyeing off Derek Chisora and the winner of the Oleksandr Usyk and Joe Joyce WBO interim title fight believed to be scheduled later this year.

“I’m open to fighting anyone,” Parker told Sky Sports News. “But with the talks from my promoter, Eddie Hearn and Matchroom and with [manager] David Higgins, they’ve got a clear pathway for me this year.

Despite only two losses in his boxing career against Anthony Joshua and Dillian Whyte, some fans felt Parker didn’t show anywhere near enough to give any of the top fighters an issue.

Whoever wins between Oleksandr Usyk and Joe Joyce will fancy the hell out of a title defence against Joseph Parker.

It was a strange card across the board.

David Nyika, a dual Commonwealth Games gold medallist, won in 28 seconds after his professional cruiserweight debut ended after Jesse Maio, who was 3-0 in his career, ducked into a punch.

It caught him behind the ear but Maio didn’t beat the count through protestations he was punched in the back of the head.

It left a bad taste in the mouths of fans with boos raining down on the winner.

“I really would have liked to have got a few more rounds but this is boxing,” Nyika said. “He ducked under a good shot and caught it behind the ear and I can’t do anything about that. I can’t control where he puts his head – if it’s in an illegal position that’s his bad, that’s his foul.”

Equally strange was Panuve Helu and Nik Charalampous’ draw after Charalampous appeared to be targeting Helu with low blows.

Charalampous was docked a point in the fourth round.

But he continued it didn’t change the strategy with the referee telling him to “get those punches up” and the commentators calling for more penalties or a disqualification.