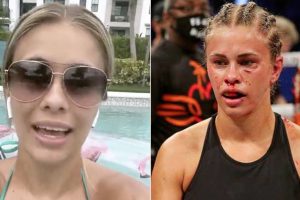 Paige VanZant has confirmed the date of her next BKFC fight in a sizzling video on Instagram.

The MMA babe made her BKFC (Bare Knuckle Fighting Championship) debut in February against Britain Hart.

Despite going into the bout as the favourite, VanZant suffered a surprise defeat on the judges’ scorecards.

All three scored the contest 49-46, leaving the 27-year-old licking her wounds after making the move from UFC.

After threatening to dramatically quit the sport, VanZant backtracked on her decision following support from her husband.

And now the blonde bombshell has set a date for her hotly-anticipated return to the ring later this year.

Speaking from her pool in an Instagram Q&A, VanZant was asked when her next bare knuckle fight is.

She said: “It is in July. I thought it was in June but we were waiting on a few things so it’s July.

“I’m very excited and we should be able to announce the opponent extremely soon.”

BKFC President Dave Feldman hinted at VanZant’s next possible opponent in an interview with MMA Mania in February. “I think she’s really going to take a step up in her next fight. Pretty sure we have the opponent.

“We’re just dotting the I’s and crossing the T’s on this one. It’s another well-known name and I think the public is really going to get behind this one.

“I think it’s going to be a really competitive fight.”

Speculation is rife over who VanZant’s next opponent might be, with Bec Rawlings one name that has been mentioned.

VanZant beat Rawings at UFC on Fox 21 in 2016 and the pair could yet be reunited for a follow-up bout in BKFC.

Regardless of whoever VanZant fights next, we’ll be watching.