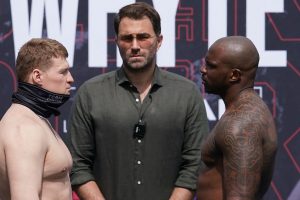 Dillian Whyte will be seeking revenge when he locks horns with Alexander Povetkin for a second time on Saturday night – but only 20 per cent of punters are backing him to beat the Russian.

Whyte was knocked out by Povetkin in brutal fashion when they first met at Matchroom’s Fight Camp last August, with an explosive left uppercut rendering him unconscious and putting his world-title aspirations on hold.

The Brixton heavyweight was only one win away from securing a long-awaited mandatory position with the WBC, something he can reenforce by coming out on top in his rematch with Povetkin this weekend.

Yet according to figures from Ladbrokes, nearly 80 per cent of their customers have backed Povetkin to prevail again on Saturday night.

Despite being a 5/2 outsider, the Olympic gold medallist has been tipped to win the eagerly-awaited rematch by the majority of punters, with Whyte only receiving just over one in five bets.

Close to two per cent of customers have backed the draw, which would be a frustrating result for both men.

Regardless of this cash influx on Povetkin, Whyte remains a heavy favourite to come out on top in the rematch at a price of 3/10.

The majority of boxing experts believe he will right the wrong on Saturday, including old foe Anthony Joshua.

“I was upset for Dillian [when he lost against Povetkin], even though I want to punch him up,” Joshua told Sky Sports.

“I was upset because, aside from the competition that me and him have, and he’s in my industry, he was one step away from competing for a world title.

“But nevertheless, he’s got a rematch, and if you fail the first time, you dust yourself off and you go again. This is his second opportunity to go again. I wish him well.

“I was shocked the first time but I was more upset for him because of what was next to come. Remember I was talking about that pot of gold, and Povetkin landed a punch-perfect punch?”

He then added: “The second time around, even though I respect Povetkin so much, Olympic gold medallist, world champion, and he’s only lost to Klitschko and me, the strength Dillian’s had to pick himself up takes some doing.

“I think that type of energy to take into the rematch will be the reason for his victory.”

READ MORE:Anthony Joshua vs Tyson Fury 'could be in UK' due to potential Hearn contract issue