Home » Boxing » No judges for Mayweather-Paul, but KOs allowed

No judges for Mayweather-Paul, but KOs allowed 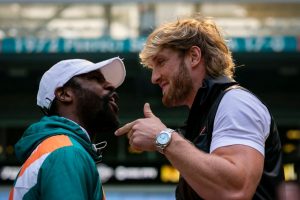 The exhibition boxing match between Floyd Mayweather and Logan Paul won’t produce an official winner, but that doesn’t mean a stoppage cannot occur.

Mayweather vs. Paul will not have judges ringside and an official winner will not be announced, a spokesperson for Florida’s Department of Business and Professional Regulation told ESPN. However, the spokesperson said knockouts are not prohibited and any stoppages would be up to the referee’s discretion.

The polarizing bout between the legendary boxer and the YouTube star is scheduled for Sunday at Hard Rock Stadium in Miami Gardens. It will be distributed by Showtime pay-per-view.

The exhibition, which consists of eight three-minute rounds, is not officially sanctioned by the Florida State Boxing Commission, which is overseen by the Department of Business and Professional Regulation, according to a spokesperson. A commission referee will be provided, however.

Mayweather and Paul will wear 12-ounce gloves and no headgear, per the spokesperson. The spokesperson said the promotion could conduct some kind of vote for the winner, but it won’t be recognized as official. An exhibition does not count toward professional records.

Due to the stark size and experience difference between the two men, the Florida State Boxing Commission could not, by rule, regulate the bout as an official pro boxing match. Paul weighed 199.4 pounds for his professional debut in 2019 — a loss to fellow YouTube star KSI. Mayweather has fought mostly at 154 and 147 pounds over the years.