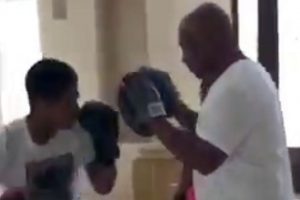 Miguel Leon Tyson showed flashes of his father as he worked the pads to display his boxing skills with ‘Iron Mike’ himself.

Mike Tyson earned 44 of his 50 wins via knockout due to his ferocious style en route to becoming the undisputed heavyweight champion of the world.

The 55-year-old superstar’s peek-a-boo style allowed the him to wreak havoc on his opponents inside the ring.

In a video uploaded to Tyson’s Instagram, it appears his son is looking to follow in his father’s footsteps.

Miguel impressed with his work on the pads, throwing powerful lefts and rights during a ruthless combination.

Miguel managed to land ferocious uppercuts while the boxing legend continued to back up, with Tyson’s son showing his quick footwork while weaving in and out of shots.

Tyson retired from boxing after suffering successive defeats against Danny Williams and Kevin McBride in 2004 and 2005 respectively.

The Baddest Man on the Planet made his highly anticipated return to the squared circle against boxing legend Roy Jones Jr in an exhibition clash in 2020.

The fightwent the distance at the Staples Center in Los Angeles, with the contest ending in a split draw.

Do you think Miguel Leon Tyson will become a professional boxer? Let us know in the comments section.

Tyson, who became the youngest heavyweight champion in boxing history when he defeated Trevor Berbick at 20 years of age, is rumoured to be set to clash with YouTuber Logan Paul in the ring in 2022.

His son Amir wants to enter the boxing scene and clash with Paul – but Tyson has warned him of the consequences that come with losing.

“I said, ‘Man, just chill the f**k out.’ He wants to fight Logan Paul and those guys. He wants to do that.

“I said, ‘Man, just get a job. Get a real estate licence. Just chill out, man. Why can't you take advantage of your lightweight wealthiness? Just chill.’

“You don't want none of that heat. I'm telling you. This drives people to commit suicide, getting humiliated in front of millions of people.

“You gotta be able to take that pressure and heat. Not many people can do it.

“It seems like a lot of people, but the people doing it is such a small per cent. It's probably one per cent.”