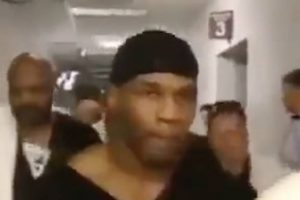 Mike Tyson's spine-tingling ring entrance for his comeback fight against Francois Botha re-emerged on social media over the weekend.

Tyson, who was returning to the ring after a lengthy ban received for biting Evander Holyfield's ear, entered the ring to a song by rapper DMX.

The ferocious heavyweight chose DMX's 'Intro – It's Dark And Hell Is Hot' as his ring walk music, and the clip was made all the more eerie by the silence from the commentators.

The clip – from 1999 – resurfaced on social media after the tragic death of DMX.

The rapper, real name Earl Simmons, passed away on Friday after a 'catastrophic cardiac arrest'.

His music was often used by fighters for their ring walk music, and his impact on the sporting world was clear to see.

NBA superstar LeBron James led the tributes after his death was confirmed by his family.

A statement from Simmons' family referenced the impact he had on the world through his music.

“Earl was a warrior who fought till the very end," the statement read.

"He loved his family with all of his heart and we cherish the times we spent with him,” they said.

“Earl’s music inspired countless fans across the world and his iconic legacy will live on forever.

“We appreciate all of the love and support during this incredibly difficult time.

"Please respect our privacy as we grieve the loss of our brother, father, uncle and the man the world knew as DMX.”