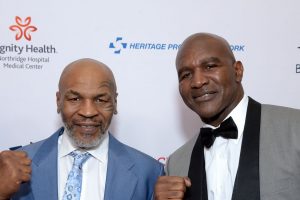 Mike Tyson has snubbed a £21.5million offer to lock horns with old rival Evander Holyfield for a third time in May.

‘Iron’ Mike, 54, recently revealed on his Hotboxin’ podcast that he is set to return to the ring for his second comeback fight in Miami at the end of May.

The former undisputed heavyweight champion laced up the gloves for the first time in 14 years last November, making a shock return for an exhibition bout against Roy Jones Jr.

And after their contentious draw, he set his sights on climbing back through the ropes for another exhibition in 2021.

Holyfield, who got the better of Tyson twice in the late 90s, has spoken openly about his desire to face his arch-nemesis for a third time at some point this year.

The 58-year-old recently claimed to be in talks with Tyson’s camp over a potential trilogy bout, only for his team to see a £21.5million offer rejected.

Holyfield’s manager Kris Lawrence said in a statement on Monday: “We thought this was a done deal but it quickly fell apart when Tyson’s people declined all offers.

“We were negotiating in good faith all along and it appears we just ended up wasting our time.”

Tyson was stopped by Holyfield inside the distance when they first met in November 1996.

And their rematch six months later proved one of the most infamous fights in boxing history.

During the third round, Tyson was disqualified for biting a chunk out of Holyfield’s ear, which earned him a 16-month ban from the sport.

The pair have since become good friends, yet Holyfield is not best pleased with his old foe’s reluctance to fight him again.

“My side tried to make the fight happen and we got nothing but excuses. Now I can see why he wanted a tune-up fight before thinking about fighting me,” the former two-weight world champion recently said.

“Roy Jones was a good local opponent for Mike, but a fight with me would be a global event and the only fight that anyone wants to see is a fight between us.

“There is absolutely no reason why we shouldn’t make it happen. No more excuses. This is the fight that must happen for both our legacies

“Sign the contract and get in the ring, Tyson. The world is waiting and it’s on you now. I’m ready.”