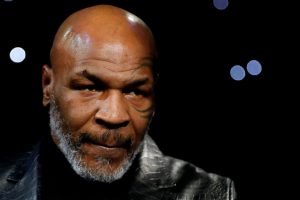 Mike Tyson has been offered a world title shot by Trevor Bryan after he also called out Anthony Joshua and Tyson Fury.

The 54-year-old made a return to the ring earlier this year as he took on Roy Jones Jr in an exhibition bout.

It was declared a draw, but many felt Tyson was a deserving winner following an impressive performance.

"I'll even give Iron Mike Tyson the opportunity to come back and fight me for my title. I'm more than ready, so let's get it on. We are ready to go.

"I'll take on Mike Tyson for a tune-up, and then I'll fight either Joshua or Fury the same night."

Tyson himself has linked with a rematch against Lennox Lewis, the man he lost to when they finally fought in 2002.

The Brit was commentating for Fox Sports on Andy Ruiz Jr's fight against Chris Arreola recently when he was asked about a prospective bout with Tyson.

Lewis also addressed the speculation in March when he told TMZ : "If the public wanted it then we would probably talk.

"I don't know. I don't really have nothing pushing me in the ring right now. People would love to see that fight but I don't know."

Tyson has also been linked with a fight against Evander Holyfield, a man he lost to twice in the 1990s.