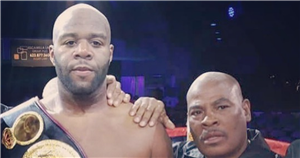 Trevor Bryan has thrown down the gauntlet for a potential clash with Mike Tyson – despite being 23 years younger than the boxing legend.

Tyson sealed a sensational return to the sport in November of last year, playing out an exhibition draw with Roy Jones Jr after almost 14 years out of the ring.

The 54-year-old is eager to fight again and recently suggested he is closing in on a September rematch with old rival Lennox Lewis, 55.

Evander Holyfield is also desperate to lock horns with ‘Iron’ Mike for a third time, however talks between the two parties collapsed earlier this year.

And now Bryan, who currently holds the WBA ‘Regular’ heavyweight title, has thrown his name in the hat for a potential shot at Tyson later this year.

“I’ll even give Iron Mike Tyson the opportunity to come back and fight me for my title. I’m more than ready, so let’s get it on. We are ready to go.

“I’ll take on Mike Tyson for a tune-up, and then I’ll fight either Joshua or Fury the same night.”

Bryan has held the WBA ‘Regular’ title since January, when he toppled Bermane Stiverne.

He is currently promoted by Don King, who stewarded the early stages of Tyson’s career.

Tyson and King had a turbulent relationship throughout the former’s career, but they have since made up and rekindled.

King was once accused of fleecing the former undisputed heavyweight champion for £78million when he came out of prison in 1995.

In the end he settled for £10million out of court, but Tyson remained hostile to the “reptilian motherf*****” for a number of years and even threw water over him at a 2018 convention.

READ MORE:Jake Paul told he will 'have his pubes smacked off his chin' by UFC legend