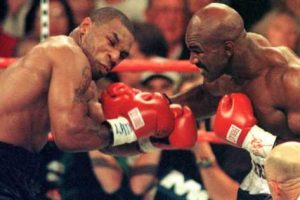 Mike Tyson has announced his long-awaited third fight with Evander Holyfield will go ahead in late May.

The boxing world can now look forward to the two heavyweight greats battling it out in the ring to complete their trilogy.

Tyson revealed: "I just want everybody to know, the fight is on with me and Holyfield.

The Baddest Man on the Planet clearly still has total faith in his ability, even at the age of 54.

Holyfield will be 58 by the time the fight comes round, and he has been pushing for an agreement in recent months.

Tyson made his comeback to the ring last year when he drew with Roy Jones Jr.

Facing Holyfield, who he lost to twice during the 90s, will be an even bigger challenge.