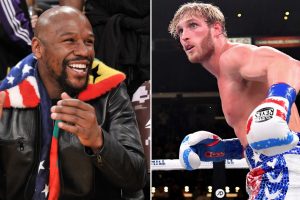 Floyd Mayweather and Logan Paul could host their rearranged exhibition fight in June with a number of host cities and rules being negotiated.

The pair were due to fight on February 20 this year before Paul said there were "complications" in his agreement with the former five-weight world champion.

Mayweather, 44, posted on his Instagram that the fight could take place in one of either Las Vegas, Los Angeles, Miami, Dallas or Atlanta.

Paul is famous for his "Impaulsive" podcast and first entered a boxing ring to fight British YouTube rival KSI in 2018.

He was last seen as a celebrity guest with WWE for their latest edition of Wrestlemania.

This won't be Mayweather's first exhibition either.

He made $275million in his crossover with Conor McGregor and a three-round fight with Japanese fighter Tenshin Nasukawa.

If Mayweather and Logan Paul fight, there will be some factors to consider including the proposed date of June 5.

The Athletic report that the fight will be on the same night as Teofimo Lopez defends his lightweight world titles against George Kambosas.

They also claim that Mayweather, who fought his last world title fight as a welterweight, will stay at a weight limit of 160lbs, with Paul being allowed an extra 30lbs at 190.

Paul has previously expressed a preference for the fight to be over six three minute rounds.

The fight could still be moved to a Sunday after Ryan Kavanaugh, the boss of streaming platform Triller, warned Mayweather not to compete with him in a pay-per-view clash of the two fights.

"That's an exhibition with all types of crazy rules and if I was them I would not want to go up against us," Kavanaugh told The Sun.

"I have no concerns of going up against them. But I do believe they are going on Sunday, from everything I've been told."

READ MORE: Truth behind Jake Paul being 'rushed to hospital' after punch from a real boxer