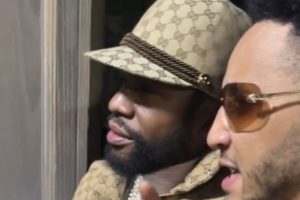 A Floyd Mayweather fan almost passed out after meeting the legendary boxer and needed help to stand as he was lifted to his feet.

The former five-weight world champion met the fan in Dubai as he attended a number of events in the United Arab Emirates where he was able to meet his supporters.

Mayweather is in the Arab state after announcing he will return to the ring for an exhibition bout in Dubai at the end of February.

It will be the first time he has fought since his last exhibition bout against YouTuber Logan Paul in June last year. One fan that Mayweather met in Dubai was overwhelmed at meeting his hero and reportedly told Mayweather: "After my God, I respect you."

The fan had dropped to their knees in awe of their sporting idol before later being lifted to their feet but struggled to stand unassisted.

As they looked like they might be about to pass out, one onlooker was heard shouting "he needs air."

Mayweather appeared confused by the overawed fan but did pose for a picture and hug them once they had composed themself.

Who should Floyd Mayweather fight in his exhibition bout next month? Let us know in the comments section below.

The 44-year-old will return to Abu Dhabi next month after confirming he is fighting in an exhibition bout on February 20 in a press conference last week.

The fight will headline a card that is set to be staged on the rooftop helipad of the iconic Burj Al Arab hotel with YouTuber Reshad 'Money Kicks' Belhasa a rumoured potential opponent.

Mayweather's most recent fight was another exhibition bout against Logan Paul in Miami in June last year, with no winner declared.

Speaking to the media last week, Mayweather said: “We will be doing a special limited edition boxing showcase right here on the helipad – February 20.

“It’s always been a goal of mine to come to the UAE and put on a show and display my talent for the people in the Middle East.

“We haven’t chosen an opponent yet, but we will let the people know who the opponent will be.”