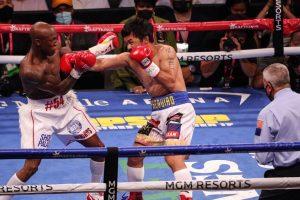 Father Time caught up with Manny Pacquiao as he slipped to an underwhelming defeat by Yordenis Ugas.

The 42-year-old had boasted he was better than ever coming into his 72nd professional fight – but looked a shadow of his former self.

And he now looks set to hang up his gloves and bring an end to a glittering 26-year career which saw him win world titles in eight weight divisions.

Ugas, who was dogged rather than dazzling, did enough to jab his way to a unanimous points decision in Las Vegas to retain his welterweight world title.

Pacquiao was due to clash with Errol Spence in Sin City before the unbeaten world champion was forced to pull out with a torn retina.

Ugas, 35, who had been due to box on the undercard, stepped in at 10 days' notice to take on the Filipino.

After losing a split decision to Shawn Porter in 2019, he had won his last three fights but had 'won' his belt only when Pacquiao was designated champion 'in recess' by the WBA following a two-year absence from the ring.

Pacquiao had nought fought since he outpointed Keith Thurman but he started quickly, edging the first round by switching his attacks from body to head.

But Ugas responded well in the second session as he out-landed the elder statesman with his jab before following up with his right.

Pacquiao looked to have slowed during his hiatus from the ring but was able to rally himself towards the end of the third.

Ugas was then warned for a low blow early in the fourth round but the Cuban was by now beginning to find a home for his right hand.

Each round was razor-close but Pacquiao slipped into a new gear in the fifth round to potentially edge ahead.

Neither man took a step back from the centre of the ring as the fight hit the halfway point as Ugas made a mockery of pre-fight fears he had injured his bicep by firing out his piston-like jab.

And the underdog introduced his right hand to good effect as he began to edge clear.

Pacquiao was struggling to respond as his famous speed alluded him and he failed to manoeuvre himself inside Ugas' long levers.

But he improved in the ninth round only to lose his momentum as the fight headed into the championship rounds.

Pacquiao gave himself a chance by rallying in the penultimate session but Ugas responded with his right hand as both men opened up in the final stages.

And it was the Cuban who finished the stronger in the final stanza before both men saluted the 17,000 T-Mobile Arena crowd.

It was left to the judges to surely bring the curtain down on Pacquiao's career by awarding Ugas the fight by scores of 115-113 and 116-112 (twice).