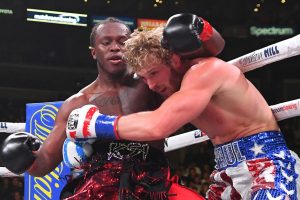 Logan Paul has not ruled out deploying his wrestling skills in his exhibition fight with Floyd Mayweather.

Paul wrestled in high school and in college before abandoning his education to focus on growing his social media audience.

But as he prepares to take on Mayweather in Miami on Sunday, the YouTube star has admitted he might bend the rules if he is struggling against the ring legend.

"For Floyd's sake, let's hope it doesn't get physical," he told Sky Sports. "It's a fight, anything can happen.

"There's a moment that goes through every fighter's mind, everyone we spar, everyone Jake has beat, when we hit them and they realise we'd don't just do YouTube, these guys have put their heart and sole into this.

"I hit hard and you're going to see Floyd's eyes light up when I hit him."

Paul's coach Milton Lacroix also believes his pupil's wrestling background could aid him in the ring.

"If Floyd decides to start chasing Logan and grabs him… remember we've got a wrestler going against a boxer and sometimes when a wrestler gets hold of you they know how to lock and twist and turn you," he told Showtime. "Anything is possible."

Paul and Mayweather will clash over eight three-minute rounds but no winner will be announced after the 24 minutes.

But knockouts will be allowed at the discretion of the referee – and the likelihood of a stoppage increased after the glove size was reduced from 12oz to 10oz.

Both men have predicted they will stop the other with Paul boasting: “For those people telling me that it’s impossible; you’d be lying if you said there wasn’t a chance that I could beat him.

"I think I’m going to go in there and decapitate him in the first round, and if it doesn’t happen, we’re going for the second, and then the third and the fourth.

"Who knows, it could go the distance, but it’s going to be a f***ing show regardless.”

Mayweather also believes he will enjoy an early night with the Hall of Fame-bound fighter urging fans to back him to drop Paul.

"This fight will not go the distance, I promise. Bet on it," he said. "Will Logan Paul hit the canvas? Absolutely, bet all of your money on it."